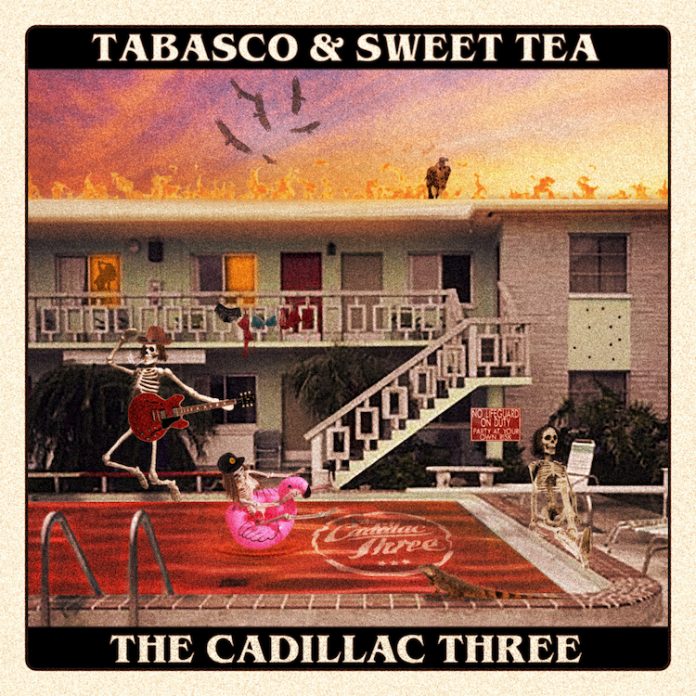 I was lucky enough to see Prince play live once. The way he used to announce gigs was interesting. About two weeks before he was due to play, the tickets would go on sale. There was no warning.

There was a touch of that about “Tabasco And Sweet Tea”. The second TC3 record of 2020 and barely eight months after “Country Fuzz” – an album that I pronounced with typical clumsy prose “saw them get their Tennessee Mojo back.” – was first mentioned about two days ago.

Now, I immediately thought “oh right, a lockdown record”. Forget that. In fact, whatever you imagined for this record, I can say with some certainty, you ain’t never thought this.

Essentially, if you ever thought Country Rock should be more James Brown than James Gang, this is your jam. And you know that Prince thing at the start? He’d have been proud at the about turn, not to mention the funk on show here.

It kind of starts like you’d expect. For about 15 seconds, the title track is southern rock. Then something happens. It’s called a bassline and this has loads of them. “Ahhh but,” seasoned TC3 watchers are no doubt saying. “They don’t have a bassist”. They do now. Kelby Ray ditches the Lap Steel for this, and you have to say, that the reboot is fun.

Yes, ok, its not going to change the world, but come on “Stop That Girl” isn’t half fun. Likewise, even someone like me who couldn’t care less about cars, can raise a smile at “Head Over Wheels.”

And, where this record actually scores is the fact that whilst it sounds nothing much like they’ve ever sounded before, its not so much of a departure that its not The Cadillac Three. “Sweet Southern Spirit” for one example could have basically been on any of their albums, it just wouldn’t have sounded like this.

Plus, if I had to stick my neck out, then I am going to propose this hypothesis. TC3 are having more of a good time on “Tabasco & Sweet Tea” than on any other one of their albums. I reckon we can tell this by the fact “Road Soda” actually rhymes “thirsty” with “worsty”, and is not even sorry.

Of all the things that remain intact, then this one is the key: the ability of Jaren Johnston to write catchy hooks. “Bridges” is a laid back, almost ballad one, but try and get it out of your head. Go on. Even the utterly ludicrous hymn to the sweet leaf, as it were, “Devil’s Lettuce” is better than it should be.

“Crispy” swings a big set of funky balls, “Money Ain’t Shit”, could be on a Fantastic Negrito record (to be fair most of them could in honesty) and here’s the thing: if you can’t spot the chutzpah on the last two, then you ain’t looking. “It’s a matter of fact,” sings Johnston on “Turn The Radio On” (actually “raps” might be a better word?) “that songs need traction.” A thought he follows up with the suggestion: “you can’t turn it up if it ain’t on, so DJ play my fucking song”.

Then the last one “Sabbath On Cornbread” (which is title of the year, surely?) holds the key. “one thing you can bet your damn bottom dollar on/Gonna stay the same/These three longhairs born and raised here/ Gonna keep on changin’ the game” is more than a throwaway line here, it’s the damn point of the album.

Now, whether this is a new direction or something fun for 2020, only time is going to tell. However, I’ve listened to the album three times. The first one my thought was “what the hell’s that.” The second was “this ain’t bad, you know.” By the third the only question was “why did it take them so long.”

Yours might be the same, equally you might  – as many will –  hate it. Frankly, The Cadillac Three appear to have not a care in the world right here, and the results really should put a smile on your face.