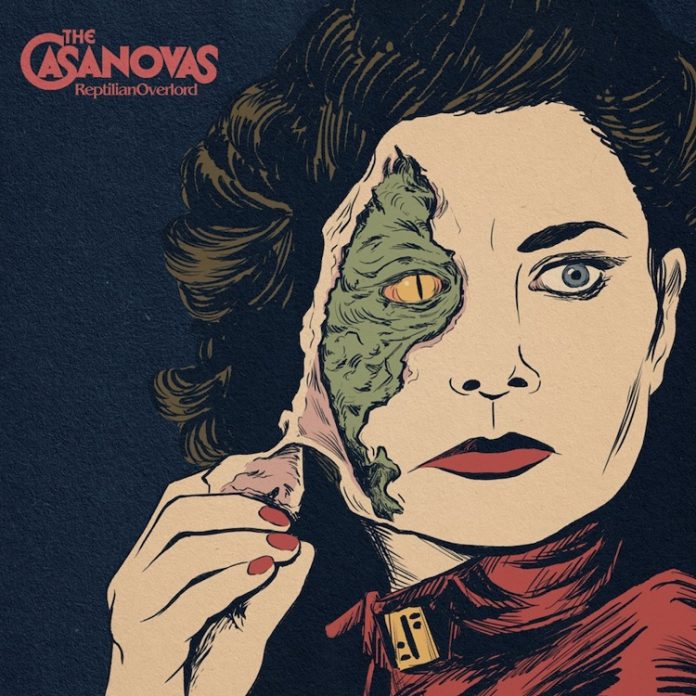 The Casanovas have been going a long time. 21 years to be exact, and if Tommy Boyce and whoever has joined him haven’t always been the most prolific (by my reckoning “Reptilian Overlord” Is their fourth record) then you can never deny two things about the band.

First, they play the music they love. And second, they are damn good at it.

To rewind to the mid-2000s, I was in a severe You Am I related kick and was trying to find as much good, honest, Aussie Rock n Roll as I could find. I found them, somewhere on the internet.

And listening to “…..Overlord” here, it is tempting to think that not much has changed. “Hollywood Riot” is unmistakably Australian, jeans, t-shirts, proper rock n roll by proper rock n rollers. The sort that work all week to do this at the weekend (Tommy is an architect in real life). The Casanovas are a little dirtier than the obvious peers though. The opening verse explains it: “working harder to please for the coke and the sleaze everywhere” and this might be as catchy as Airbourne, as gritty as Jet, but its got a feel all of its own.

This is produced by Mark Optiz (you name them, if its Aussie and rocks, he’s worked with them) and “Outlaw” proves that his involvement is worth it. It distils everything that’s ever been rock n roll into handy three minute package. It rhymes “Outlaw” with various things: “ice ream that never thaws” is my favourite, but a “cigarette, a drink and a couple of whores” isn’t far behind. It’s mighty and its glorious.

So is the rest of it, “Cold Day In Hell” is the work of men (and this does have a lot of testosterone flying about) who dreamed of playing this stuff. So they did. Likewise, the Kiss-like grooves of “Lost And Lonely Dreams” tell the tale of a small town girl in a lonely world, as it were, but so well done is this that it never strays into pastiche.

Brett “Wolfie” Wolfenden plays a blinder throughout on drums, but the way he beats down on “Stand Back” anchors down the whole thing. Indeed, the whole band feels like a gang. Like if you took one on, you’d best be ready for all of them, and the punk rock feel that lurks just below the surface everywhere sticks its head above the parapet on “St Kilda Is Fucked” – a lament that the Melbourne seaside town (which gave the world Shane Warne, I think? So that’s reason enough for every Englishman to dislike it) has been taken over by poseurs.

Whatever TC are, they ain’t that. “Midlife Crisis” underlines that neatly. Essentially more evidence that this would be an immense band to watch live, as it casts itself as an average Joe that dreams of more. The harmonies suggest they still know how to have fun, mind you.

“Red Hot” verges just a little on cliche, but then there’s got to be sex to go with the drugs and rock n roll, I suppose? “Bulletproof” swaggers in on the bass of Damo Campbell, but that’s basically a preamble for the title track.

“Reptilian Overlord” is different to all the others that bares its name. Musically it rocks and rocks hard, but the words are either a tongue in cheek put down of modern leaders, or it’s a lecture by David Icke. Take your pick. It also belongs more to a band from the LA Desert than the laid back beaches of Melbourne, but then The Casanovas have that individualistic streak to their music.

This collection might just be their best too, given it’s got the most rock n roll feel of a career that has been steeped in it, and also a set of songs that by and large meet the vision.