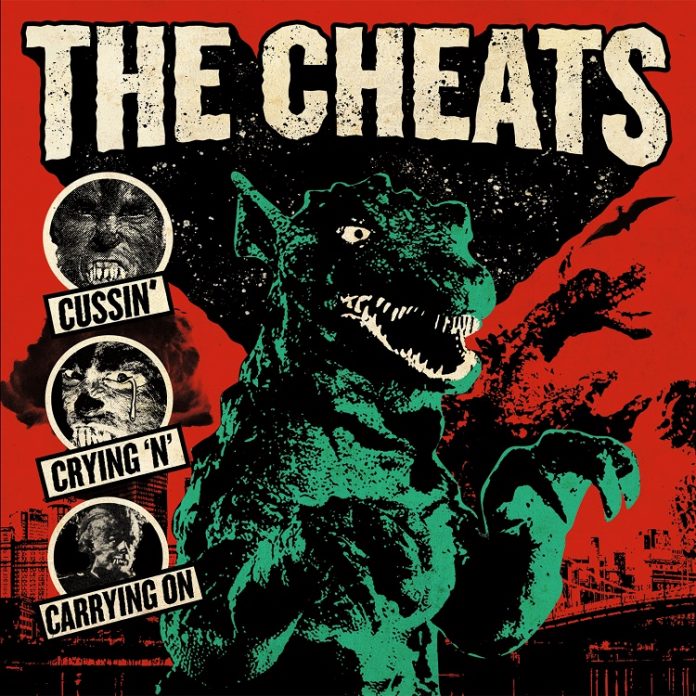 It’s an ironic thing, perhaps that for a band called The Cheats, the Pittsburgh-based fivesome play some of the most honest rock n roll there is.

That was always the case, to be fair. Way back in 2002, singer Todd Cheat faced the break-up of the brilliant Silver Tongued Devil by deciding that things had to get sleazier, and the first The Cheats album (now long out of print) was, along with Crank County Daredevils record from a year or two later, the first time I heard something that sounded dangerous for years.

The early 2000s were an odd time, nu-metal, pop punk, and the arse end of grunge. What you did if you were a rocker was you got into country – if you were me, anyway – and The Cheats were one of the bands that pulled me back in.

Fast forward 18 years and many line-up changes, a huge hiatus and here they are with their first new record since 2012 (there was, apparently a split with Electric Frankenstein that I must dig out) and with the world looking for a good time, here is “Cussin’, Crying And Carrying On”.

Now if you aren’t familiar with The Cheats, then I’ll save you the bother. There is a song here called “FDF” that goes like this: “Fight, drink and fuck, pretty much sums it up….” Now, I haven’t had a scrap with anyone for decades, I am tee-total and I live with my dad, so I am not going to claim I am well-versed in any of that triumvirate, but I do know what escapism is, and this is it in spades.

Right from the opener of “Give Up The Ghost” (sample line: “Ozzy is something you’ll never know, can’t play without no soul”) it is The Cheats turned up to 11.

They have a sound that borrows as much from The Cult as it does from Backyard Babies, and there is a healthy dose of punk here too. “Rock n Roll Life” has the sort of solo that Guns N Roses first album was built on, but the verses have a Sex Pistols sneer.

“Got Lucky” gets “sounds like the Wildhearts” bonus points, and The Cheats skill for writing hooks and choruses is all over “Lil’ Timebomb”. It sticks with you, that’s for sure. “Hella 69” builds a little more slowly and has a touch of Lee Harvey Oswald Band about it, but of all the things “Empty Pockets” is, then slow isn’t one. Turbo-charged filth, Zeke fans might start here.

Picking a favourite out here is a tough job, seeing as they all sound like the soundtrack in a mud-wrestling bar, but “Too Much Too Late” is a cracker. It’s all to do with the presence of two guitarists, it always gives stuff extra bollocks, and Devin Holiday together with Rob Senomar does a fine job on the likes of “Lookin’ So Tough” and the bass groove of Philthy Phil is always to the fore, but never more than on the rollocking good time of “It’s Alright”, which seems to take “People Who Died” by Jim Carroll as its starting point.

Mostly, though, this is just rock n roll that is pure as the driven slush. “Stabbed In The Heart” has a flavour of the Scandinavian bands, “Take No Prisoners” is equal parts “Pump It Up” and Peter Pan Speedrock, while “I’m The One She Loves To Hate” is the sound of a band that you wouldn’t want to move into the house next door.

There’s even a bonus track. “Junior’s Bar” is a slightly more melodic thing. Not quite power pop, but not far off, but the hook line tells you what’s on the mind: “I hope I don’t go home alone tonight,” opines Cheat and you know he won’t, so does he.

Back in about 1986, at the height of rock’s debauchery, you just know The Cheats would have played in Hollywood, and what’s more they’d have been down at The Cathouse, with G N R and Faster Pussycat rather than The Rainbow with the Poison’s and the bands with the big hair. This is sleaze, but not out of a spray can. Instead “Cussing Crying And Carrying On” has real dirt under its fingernails.