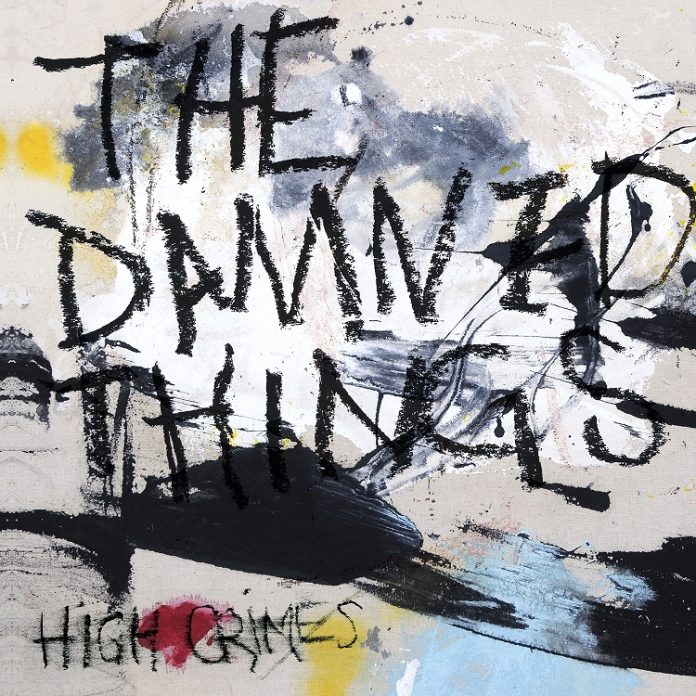 Everyone has got someone who if they say: “mate, you’re gonna love this record” they listen.

It was just before Christmas in 2010 that I got a text the gist of which was: “get yourself to HMV and buy The Damned Things, don’t question it, just do it. “

I did. And “Ironiclast” was just about the best record that year.

And forget too, that eight and a half years has passed (time flies, deal with it) and the world is a very different place, just savour the fact that The Damned Things are back.

Oh and by the way, so good is “High Crimes” that it is like Keith Buckley, Scott Ian, Andy Hurley and Joe Trohman haven’t been away.

There’s been a change on bass. Dan Adriano has come in, but other than using Jay Ruston (Stone Sour) as producer, it’s 2010 all over again – and that’s just fine.

“Cells” begins with an explosion, a scream, as if its bursting to get going, and there is a real urgency here. ETID fans will love this (and some of us who became ETID fans because of “Ironiclast).

Three minutes of utter glorious, punky hard rock, with all the clever word play and sloganeering you’d want: “we have all the time in the world, but never the timing” is a wonderful hook line (and one of many that would look ace on a t-shirt)  and anything that has an exultant shout of “guitar!” for no other reason than it fancies it, is always fun.

This, though, is only just getting started.

“Something Good” is essentially irresistible. Some kind of warped genius is at work here. If you aren’t singing this after 20 seconds, then mister, you’re a better man than I (as Aerosmith once said) and if you aren’t yelling “I’m a goddamn coward and you knew it all along” by the end of the first chorus, then check your pulse.

“Invincible” has a bluesy lead, as Trohman finds the very top drawer here, “Omen” has a sort of Thin Lizzy-ish feel. “Carry A Brick” is faster, more furious, and absolutely ready for a fight. With anyone. About anything. It is, though, safe in the knowledge that it is just about as catchy as the flu.

This is a hard rock record, but its one that is not afraid to play with the rules a touch as well. “Storm Charmer” has a massive ambition and pulls it off, but still sounds like TDT.

“Young Hearts” is choc-a-bloc with harmonies, and some well picked out keys take this somewhere new, while “Keep Crawling” has guitars straight out of the NWOBHM coaching manual, but there is something effortless about the way Trohman (who wrote these songs, according to legend, “scantily clad and afraid”) finds a hook. “I’ve been broken, I’ve been ashamed, but I keep crawling back, you keep calling it faith” sings Buckley here and there is a universal quality to this.

“Let Me Be (Your Girl)” isn’t a million miles from a Clutch-ish groove, and if we began with a sort of Every Time I Die unhinged moshpit inducer, then “The Fire Is Cold” ensures that the collection is bookended the same way.

“High Crimes” when all is said and done, is a brilliant record. It sort of had to be. For one thing it had a lot to live up to, for a second no one here is used to being associated with mediocrity.

Middle of the road? Imagine that! Now, that really would have been a crime.