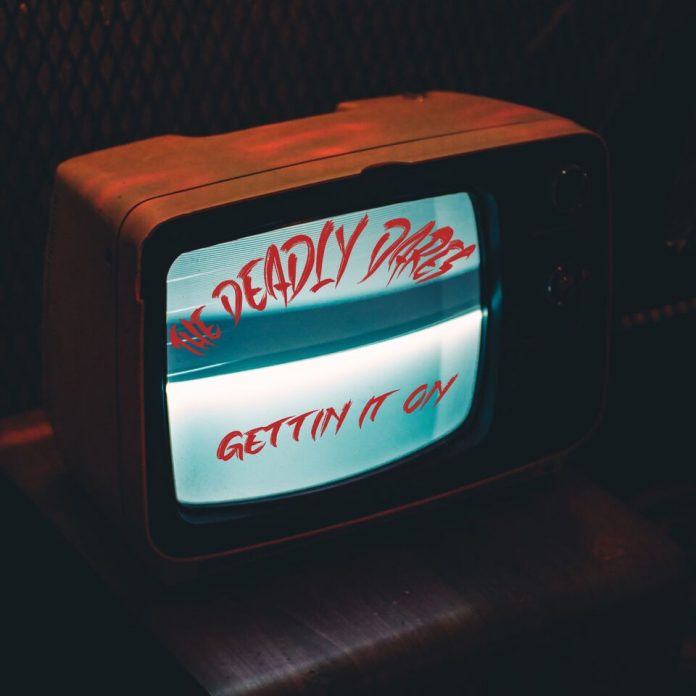 There are, of course, many reasons for starting a rock n roll band.

To get laid and have a good time seems as good as any.

I don’t know what drove Jarrett Dant, Dyrick Riney, Derrek Weatherspoon and Chuck Brown to form The Deadly Dares, but I am willing to bet.

“Getting It On” is six songs, 14 minutes of gloriously, righteously sleazy punk. The sort that people might claim is “dangerous”, when in actual fact its just great fun.

Credit to them, too for being from Nashville, TN and doing this stuff. Sitting in the middle of England, these places are merely romantic notions to me, but I am guessing that it takes guts to come out of there with music like this.

Which, in turn, of course, means they are doing this for no other reason than, well, they want to.

What they want on the title track is clear. For all the protestations that “we could find romance”. Bruv, it isn’t romance on their mind. Nope. A trip to the clinic might be needed mind you.

“Can’t Keep Me Down” is another with dirt under its fingernails “I might show up late, but I’ll show” is a key line here. It means they will not be deterred; they won’t lose.

“Up Against It” is blue-collar punk rock. “Blood, sweat and tears. Well, I’ve done this shit for years.” Goes the hook, and that’s where the band comes in. That’s why the band are so good. This is a release. An escape from all that.

The partying and excess is laid bare on “Whiskey Bottle Blues”. It’s not bluesy at all. It is a punk rock riot, to be fair, but it faces all this – and its hangover – with a stoicism. “Hard times come, and they go”. All are faced with the same attitude too. A middle finger.

“Get Down” is so raw it is positively uncooked. Starting with one of the band members saying to another, “well, just get it right this time!” it is absolutely spat out, “tripping out on Nightmare and blow” might or might not be your thing, but it is coursing through the veins here.

And why? Well, the answer lies in the first line of the next song. “No Denying” begins thus: “I am a screw up. I am all tattoed up. I guess I never grew up.”

Why should you? There’s no point. Growing up brings responsibility. The Deadly Dares live for pleasure – and hedonism alone. And “Getting It On” is fast, filthy and furious fun.