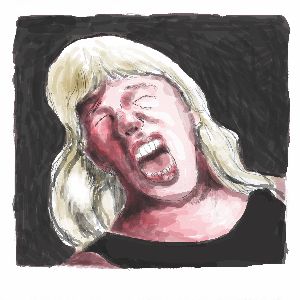 The Druids of Stonehenge are a garage rock and psychedelic band from New York City who were active in the 1960s. They began as an R&B-based rock combo in the vein of the early Rolling Stones called the Druids, but later moved to the West Coast and changed their name to the Druids of Stonehenge, evolving their sound to fit the burgeoning psychedelic rock coming to the fore. In 2017 original singer David Budge and guitarist Carl Hauser reformed with lifelong friend and Dylan guitarist Billy Cross, producing an album titled ‘Resurrection’ that explored the band’s roots in historic blues. They now have their first album of all-original material “American Ghosts” released this month. The Druids tell stories through their own rich and intimate lifetime of experiences. Each song is a short story that reflects on the indiscretions of youth, lost loves, the ‘battle of the sexes’ or hopes for the future.

The album opens with the laid back `The Prettiest Train` with some alluring guitar riffs and relaxed organ and a drum beat that guides this composition along. It`s an almost spoken word piece that relates so many great lines shared with a resonating deep vocal. We have a cracking bluesy foot stomper with `Run For Cover`. Think ZZ Top and Dr Feelgood and you`ll be in the right ballpark. A song that will NOT fail to move you. The guitar riffs and chords are truly awesome and the addition of backing vocals from Maria `MJ` Hauser in the last minute of the track was a stroke of genius.

`My Rider Is Gone` is to me a sort of bar room blues number with some wonderful resonator guitar and delightful keyboards supplied by Dan Hemmer. Henrik Askou laid down a superb beat to allow Billy Cross to let rip some blinding riffs towards the end of the track. We have a bluesy rock out with `What A Women Will Do`. There were again some sublime guitar workouts midway and throughout the piece. A sort of resignation, lyrically about being unable to comprehend or understand the opposite sex. Some of the lyrics, as the band have said, are of their time like “I know I had it figured, things that turned you on, let`s not make this complicated, let`s just get it on” so wrong yet so right.

There`s a Southern rock vibe to `The Deal` a tale of dodgy, maybe as AC/DC relate “dirty deeds, done dirt cheap” a simple type of number but so effectively delivered. They say you learn something every day and I certainly did with `Seven Percent Solution`. A brief search and I find it relates to a passage in Sir Arthur Conan Doyle`s second novel `The Sign of Four` featuring Sherlock Holmes dating back to 1890 about cocaine use. This submission is a sort of shady grubby tale of finding some seriously hard drugs and the consequences thereafter delivered in a soft rock sort of Steely Dan ala `Do It Again` texture. An amusingly wry observation on a serious subject. I have to say I loved the relaxed percussion provided by CJ Hauser and Roger Kahn, it was delightful.

`Dance With The Devil` is a low down and dirty amalgamation of blues and rock with a marvellous echo and reverberation resonance throughout. Henrik Askou`s pounding drumming was a splendid addition as was the backing vocals provided by the trio of Billy Cross, CJ Hauser, and Maria `MJ` Hauser. We have a straightforward rock outing with `Rock Candy` which is led by the backbone of Henrik Askou`s drums and Dan Hemmer`s chiming keyboard. The backing trio as with the last number were there fill the number out and to add a real depth.

`You Got To Pay` has that strolling, rolling, foot tapping bluesy rock feel about it. The probing lyrics complement this outing into the consequences that occur depending on what path you take in life. The album closes with `Slip Back Away` a track that could have been included in any Rolling Stones album from the last twenty years. The whole piece seemed to be driven from a central bass line ably furnished by Thorbjørn Appehl. There were also some glorious guitar riffs and chords and some splendid backing vocals throughout.

I have to say I found “American Ghosts” an absolute delight. David Budge has an interesting vocal range which at times is questioning, tender, humorous but at all times entertaining. Along with his co-conspirators Carl Hauser and Billy Cross and the addition of experienced musicians and friends they have succeeded in delivering a powerhouse of a blues come rock blueprint that is a joy to behold. These fellas may no longer be teenage reprobates, but they certainly are no slouches and share a record that will leave your truly satisfied.

A release to exorcise any Ghosts whether American or not.