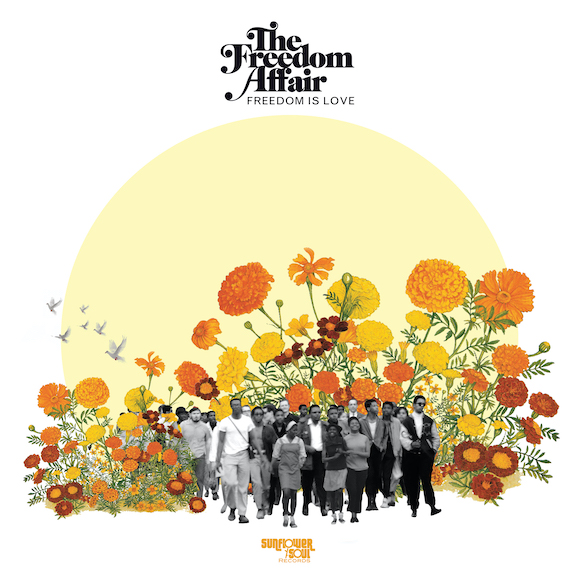 The album opens with `Heartaches Don`t Come Easy` with a drum beat that is like a heartbeat running through this song. All three vocalists harmonise to wonderful effect to ensure a feeling of anguish through the narrative of losing somebody. There`s an alluring tapped bongo type percussion which alongside the wonderful brass section brings an almost sixties feel. The sultry `Make Me Surrender` seemed to relate to a spirited woman that wasn`t willing to be the benefactor of the unwanted intentions of an unsuitable admirer. A track that was quite laid back and had a nice guitar solo midway and wouldn`t have felt out of place in the soundtrack for Isaac Hayes` Shaft.

`Outta My Mind` a tale of an unreciprocated romance, could have become really self-pitying but it has a real spring like joyous uplifting feel. The narrator knows the inevitable outcome, but it almost feels cathartic to voice the situation out loud. There`s a blissful feeling throughout which is enhanced with strings towards the latter part. Another tale of heartbreak follows with `I Know Better` which has a delightfully expansive sound with pounding percussion, horns, a guitar solo and strings that set a platform for the achingly tear-jerking vocals to shine.

`Move On` is a superbly funky upbeat message of almost girl power where a lover is told to move on in no uncertain terms. A fast-paced offering which has cracking baritone sax extracts intermittently throughout. There`s a funky vibe to Rise Up` a song of standing up for your rights. The repetition of “Let’s groove toward a brighter day, Together we can find a better way, Rise up” allows it to become a celebration for the oppressed.

`Don`t Shoot` equates a powerful message against gun crime, a simple but effective sentiment put across in two words. All three singers equate wonderfully the consequences, implications, and anguish of a fatal shooting. The message is shared against a really sympathetic musical backdrop. A further message of building steps towards a better society comes with `Give A Little Love` which enjoys a steady bass backbone throughout with occasional horn flurries and some tasteful guitar tinges.

“We`ll never be one nation if we can`t have a conversation, can`t be the land of the free if you won`t hear me” a simple but effective standpoint. The album closes out with `Love Liberates` which is interspersed with fragments of the thoughts and words of Dr. Maya Angelou, the American poet, memoirist, and civil rights activist. Again, another inspiring song with words such as “Freedom Is love and love liberates”

“Freedom Is Love” is a superb album, let alone a debut. The themes cover love, sorrow, heartbreak but also encourage ambition, friendship and unity against a superb foot tapping come head nodding musical outage. The band have been tagged as Politically charged soul music for the dancefloor! which is an excellent summary.

This release couldn`t have come at a more appropriate time with the racial tensions infecting society at present and a Presidential election less than six weeks away. We all could do worse than remember the line “We`ll never be one nation if we can`t have a conversation, can`t be the land of the free if you won`t hear me” Forty years on The Freedom Affair could possibly bring about our One nation under a groove.