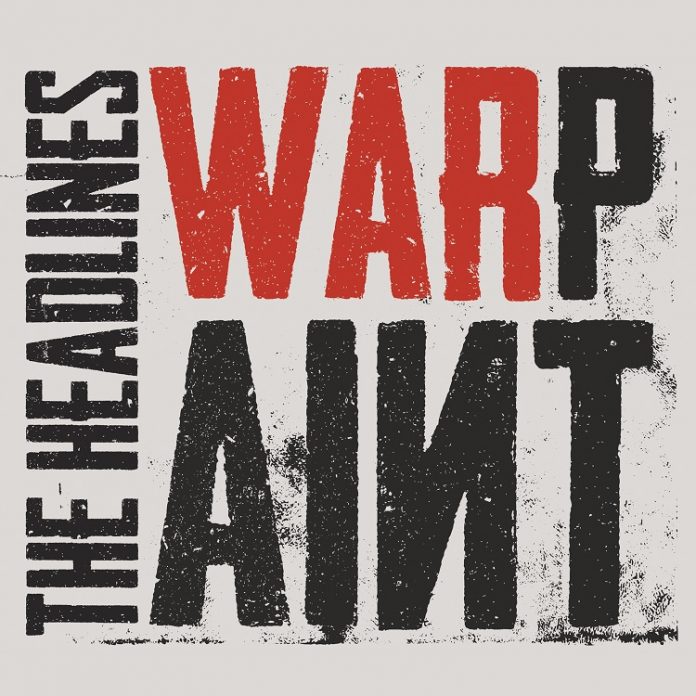 “I hate authority, never get down on your knees” – at first glance, that line from “Warpaint Authority”, the (almost) title track of The Headlines latest album – their second since Kerry Bomb took over the vocals – is, as Bowling For Soup put it once, “Punk Rock 101” but it goes deeper here.

Here, in the chorus, as she puts it: “this is not make-up, its warpaint” and this album – not just this song – is a battle. A battle to be heard, a battle against injustice, and a battle for not just women, but for the downtrodden.

It is also a damn fine – and very Swedish – take on punk rock, too. They share a producer with Backyard Babies and the mark of Chips Kiesbye is all over it. “Brace yourself….you’re gonna get blown to bits” goes the hook of the opener, and it feels like the whole record is a statement of intent.

“Sounds From The Underground” has a harmony with Jake Lundtofte which works superbly, a working class ethic here, a kind of blue collar punk if you like, and the idea of hard work remains in “Happy Street”. “Some people want us out of the way” sings Bomb, but we keep fighting back with PMA”, and this one, like any of the others you want to find, gets to the chorus quickly. You can imagine them being a brilliant festival band.

There is a kind of Bad Religion feel to “Never Stop” while Jake and second guitarist Pete II (the other Peter crashes his drums with real intent throughout) give this a harder edge than you might imagine. “Blood Brothers And Sisters” on which Lundtofte takes the first verse and channels his inner Jesse Malin in so doing, wraps this all up in a grenade and lobs the thing right in: “all the movers and the shakers,” sneers Bomb. “let’s blast them all to hell, we were never in with the in-crowd. We never had nothing to sell.”

“In The Storm” is a kind of ballad, chugging along with a real radio friendly intent, “TCTFW” gets bored of that, though and dials up the punk – and to be honest, they sound happier with that.

Headlines, though, appear to be one of those bands that seems to have melody ingrained. Even a song called “Heartbreak” seems to have a feeling that its glad to be alive, while “Spirits” might start like a Misfits track, but it has the tune of a 3 Colours Red one.

However if one song could sum up the whole record, then “Underdog” is surely that. “Roll in as the Underdog, roll out as the champion” they sing, and never has the arm been raised in victory with quite so much relish. Don’t get in their way, that’s the clear message.

The last one changes the vibe. “Funny That Way” is as gentle as this gets (and the bluesy solo takes it somewhere where it never goes elsewhere), almost as if they are reflecting on the end of the fight? Except that war never ends, really.

That, I suppose, is one of the many reasons punk rock still exists? And it absolutely sounds like Headlines are up for the fight here.