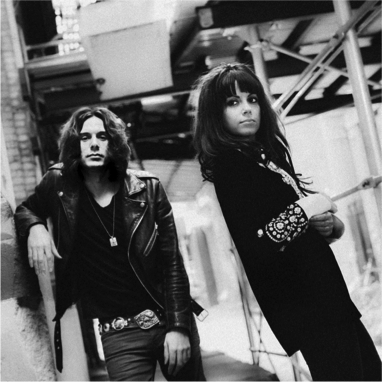 There are times when you sort of just instinctively know that a line, a song, a passage, whatever, is important.

When it comes to The Last Internationale, there’s a 58 second outro right at the end of “Soul On Fire” which I kept listening to over and over again.

Delia Paz sings it acapella, and all it says, really is this: “Ain’t got no money, no helping hand, yeah I got nothing from the man. But I got music in my soul. Come on, baby, let it take control.”

That’s TLI, really. Look, they haven’t made this album because they wanted to. They made it because they absolutely needed to.

Because the music, well, it controls them. It is them. It’s not a choice. It’s a lifestyle.

I’d seen them open for The Cult, and it was clear then that Paz was a force of nature, a wonderful voice – able to switch from the most glorious soul in “Freedom Town” to something that sees her channel something incredibly primal on “Hard Times”  – but moreover, someone who was prepared to give everything for her craft, for their performance.

It tuns out, that this wasn’t some mere guess on my part, because as the band – also including Edgey Pires – were at the lowest ebb when “….Fire” was made. Saying: “The truth of the album is that it was written at the lowest points of our lives/career. We were just dropped from Epic, we were totally broke with no money to record an album, we were being evicted from our apartment in LA, etc.”

Enter Tom Morello. Not only is he the Exec Producer on the record, but the band reckon, more prosaically, they continued due to his “strength and guidance”.

Between them, they’ve created something with a rare urgency, and yes it sounds desperate, but then these are desperate times. Not just for the band for the wider world, and that longing, confusion, if you like is all over “Mind Ain’t Free” a visceral rocker.

They follow this with something a little more lush, soul-fuelled, but if “Try Me” sounds gorgeous and Paz has one of those voices where she could make the phonebook sound compelling, then the lyrics are anything but.

And its these words that set TLI apart from the obvious competition they have. Not many bands of this type would try “The Tempest”, which for all the bluesy slide guitar is vicious, or the overtly fuzzy “Freak Revolution”, which is a wonderful piece of songwriting first and foremost, for all the helplessness it seems to be enveloped in.

More than anything, though – and we can analyse the songs until the cows come home – this is the work of people that love music. Why else, would the title track, with its haunting piano, list their heroes? Because whatever lets you down, your fave album never does, that’s why!

There’s also a staggering array of styles here, “Modern Man” sounds all modern and brooding, like it wants to fight you. When Paz whispers: “hate is a modern beast” it sounds like she means it. The one that follows, “Need Somebody” starts like its going to get folky, then it disappears off down some dark, electro road, and when she delivers the line: “Hang your hopes on love” it seems it might be the first time that Paz is unsure, as if she’s merely hoping someone is there.

“Hit ‘Em With Your Blues” is something else entirely. Almost pop, certainly happier. Then you realise that you are wrong. Because the chorus goes: “and if you’re ready baby, I will light this place, there ain’t nothing I won’t do, or leave behind.”

When even the poppy ones advocate a scorched earth policy, you’d best believe me when I say this is a deep album, but “5th World” finds the light at the end of the tunnel and wants to change the world. I don’t know if you even can at the moment with “populism” fuelling hate filled rhetoric on both sides of the Atlantic.

However, I do know this. The greatest art has always come from pain, the best moments from struggle. “Soul On Fire” comes from that place and is a phenomenal record.