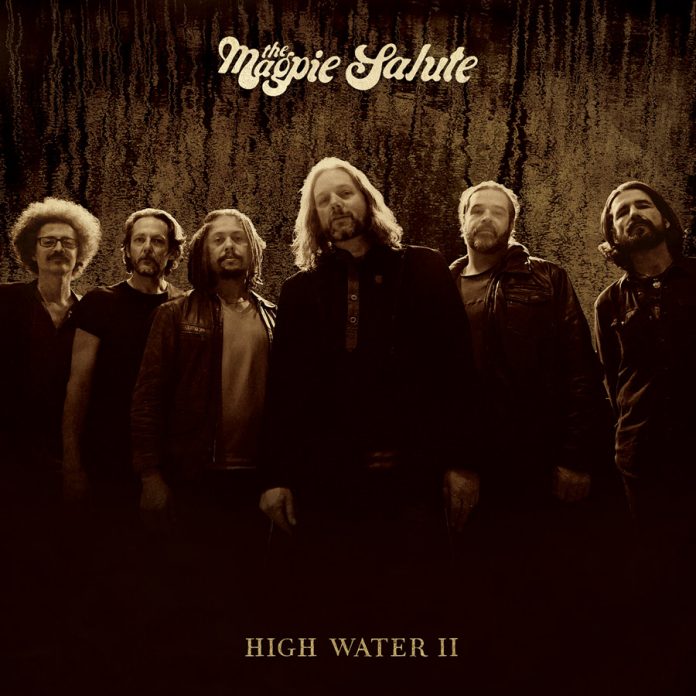 It is interesting to look at the evolution of The Magpie Salute through the prism of one song. “Sooner Or Later.”
The opener here.

The reason for that is simple.

“Sooner or later, I’ll be back where it all began…” sings John Hogg, and you feel, really that this is the one where TMS are absolutely at home.

They began with a record that rather oddly was nearly all recorded live. They sounded like they were a jam band, they actually were, to a large extent, anyway.

Then, with their studio debut “High Water I” they moved away from that a little, now, a year or so later, with “II” they sound like a fully-fledged studio band. So, sooner or later, back where it all began? For most of the band, back to the Black Crowes.

Because for as much as you want to eschew the cliché and not talk about the band that two of the guitarists and the bass player were in, it is basically impossible to ignore, because, even the most ardent fan of Black Crowes (and I love them, believe me…) can’t fail to notice that TMS aren’t half sounding like them these days.

And that’s just fine, because when Rich Robinson, Marc Ford and Sven Pipen lock into a groove, they’ve always been unstoppable. Hogg has a cracking voice too, and when you add in the wonderful keyboard work of Matt Slocum, you have something really special.

The fact that this is their best record is pretty obvious, not just from “….Later” but the follow up of “Gimme Something” which might just be the best thing they’ve done. “Leave It All Behind” adds a bit of soul and is urgently laid back – and if those words are incongruous, there is no better phrase for it.

“In Here” shows just what a wonderful guitarist Robinson is, the slide here is prime Allman Brothers. Southern rock, but not hamstrung by that epithet, while “You And I” is more country flavoured, but evoking a kind of widescreen that brings to mind an endless, starry sky, such is the breadth of it, the timelessness too.

The gentle, psychedelic nature, of many of these is shown wonderfully by “Mother Storm”, while if “A Mirror” was actually the result of a archaeological dig at the site of the original Woodstock I wouldn’t be at all surprised.

There is a mournful, singer songwriter quality about “Lost Boy”, it recalled – to me at least – Mark Knopfler (for the avoidance of doubt, that makes it very good indeed), while after all the reverie, “Turn It Around” is something of a stomper. Much fun, anyway.

The bass of Pipen is to the fore throughout, but particularly so on “Life Is A Landslide” – written solely by Robinson –  which is odd, but a real highlight and catchy as you like too, and there’s a moment, when “Doesn’t Really Matter” is in full flight, when you think that this band has it all in front of them.

“Where Is This Place” is darker, bluesier, but it ends the record superbly. And it is a record that you always hoped they’d make. Bold, and with plenty of texture and true to themselves. This one is the high water mark – so far.