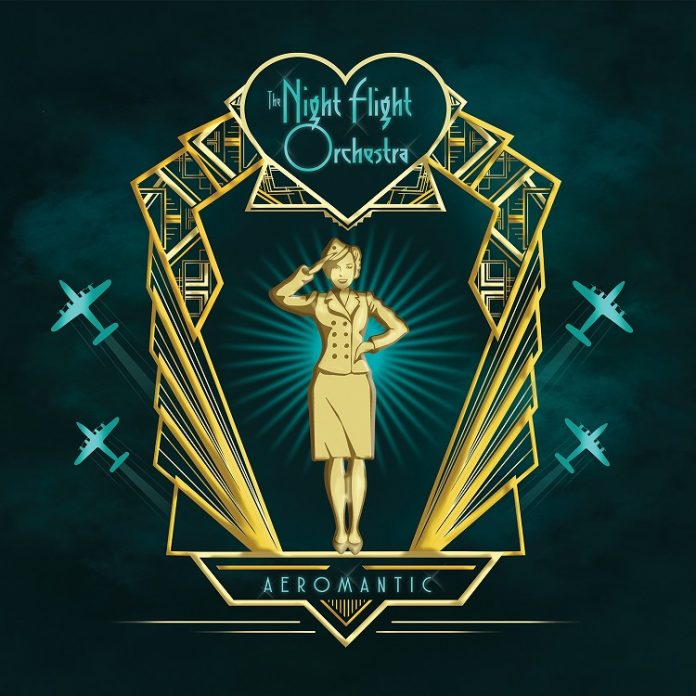 Older readers – in the UK at least – might get the reference that I am paraphrasing. But honestly, when it comes to The Night Flight Orchestra, everything hinges on these questions:

If you say “yes” to both, the only answer is this:

You know the history – probably – Björn Strid and David Andersson touring across America discussing how much they like Journey and the likes, decide that they’d like to have a bit of it, in some downtime with Soilwork.

But even if you don’t know that, or if like me, you couldn’t care less, then TNFO are your band, at least they are if you like, well, bombastic sounding AOR.

If you’ve never heard of them, it’ll take you exactly six minutes and 28 seconds to work out whether you are a fan or not. That is exactly how long it takes “Servants Of The Air” to do its thing. And that thing, is to build slowly, sound a bit like a prog metal thing, and beat its chest as Strid sings this: “I’ve been drifting across the heavens, like a supersonic wave”. No, I don’t know what it means either, to be honest. I am however certain on this. It rules. There’s stack harmony everywhere and by the time John Lönnmyr (who fills in on keyboards wonderfully here) has played the most 80s solo you can conceive – I swear even Jordan Rudess is casting envious glances- you’ll know.

You’ll know whether you want to get on board, or if you want to stand on the ground and let them leave without you, but be warned, this baby is soaring with or without you.

On “Aeromantic” they’ve actually dialled things up a notch it seems. So “Divinyls” adds a pop side to the chug, and “If Tonight Is Our Only Chance” basically imagines a world where Foreigner weren’t utter dogshit and gives them a sheen.

Let’s be real, to keep with the 70s theme, this is as camp as John Inman, but who cares? “This Boys Last Summer” is the harvest of 70s dreams and sounds like an outtake from Kiss’ “I Was Made For Loving You” phase.

Since the last one they’ve added the backing singers Anna-Mia Bonde and Anna Brygård, and the pair have played a blinder here. The choruses are not shy in any way and even the one that doesn’t half sound Supertramp, “Curves” sounds fresh and shiny.

“Transmissions” kicks in with the type of keyboards not heard since the Pet Shop Boys or Frankie Goes To Hollywood, and no one is ashamed, why would they be, on an album where the title track merrily sounds like an ELO song about joining the mile-high club.

“Golden Swansdown” is the stuff of 80s school discos, “Taurus” just for a laugh shows all them power metal boys from Germany and places, how stuff goes down and the glorious “Carmencita Seven” combines prog rock with glam rock and comes out with something wonderful.

“Sister Mercurial” and the epic “Dead Of Winter” are two sides of the same coin, but mostly they just prove something you can often overlook when it comes to The Night Flight Orchestra, and that is the seven of them have a rare and brilliant chemistry.

The last one “City Nights And Moonbeams” has a kind of Queen “Radio Ga-Ga” pulse, but it finishes a record that you will love or hate in exactly that same love or hate fashion too.

The best thing about it is this: if you are in the “loving this” camp (and you should be) however much you adore it, rest assured the band like it more. There is nothing remotely self-conscious here – and the whole of “Aeromantic” is pure enjoyment.