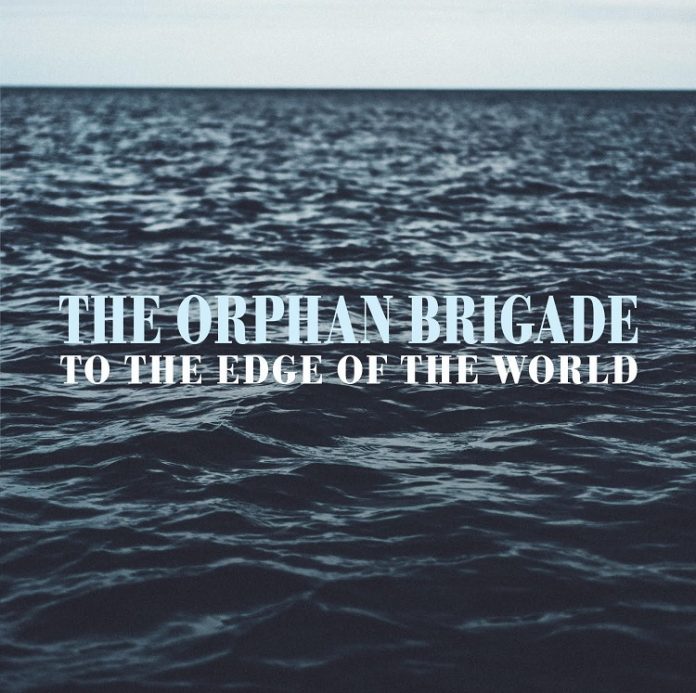 Folk / Americana three pierce The Orphan Brigade’s Joshua Britt, Ben Glover, and Neilson Hubbard like to record in some interesting and atmospheric settings. Having tapped into the gothic madness of a haunted house in southern Kentucky and the mystical heart of the Templar caves underneath Osimo, Italy, the guys returned to Glover’s Irish homeland for their latest collaborative exploration.

In keeping with their previous album exploits, the trio grabbed their gear and spent a week writing the songs on various coastal locations, cliff edges, castle ruins and even at sea aboard a fishing boat.  The result being their latest release ` To The Edge Of The World`, an empathetic testament to County Antrim.

The album opens with a moving traditional/arrangement by Barry Kerr called `Pipes’ Intro: “The Green Fields Of Canada”.

A song that was written on a rock formation on the coast road outside of Glenarm, County Antrim follows with `Mad Mans Window`. Legend has it that a beautiful young woman drowned whilst swimming in Glenarm Bay. Her sweetheart was so distraught that he lost his sanity and each day for the rest of his life he sat and gazed through the gap in the rock awaiting her return. The song to me seems reminiscent of `Not Fade Away` before opening up with some wonderful uilleann pipes that blend with the quite haunting vocals and deep backing harmonies.

Detached whoo hoos lead us into `Banshee` a tale about an Irish mythological banshee or female spirit whose wailing or keening warns of the death of a family member. The song written at midnight in Glenarm Forest has a distant ethereal feel with some compelling mandolin inflections.

`Under The Chestnut Tree` is a forlorn account associated with the ill-fated Spanish Armada and the Irish coast. It`s retold through the Spanish nobleman who drowned when his galleon sank near Ballygally in 1588. His body was taken to the local graveyard at St Patrick’s Church in Cairncastle and on the spot where he was buried grew a Spanish Chestnut Tree. The tale states that the doomed sailor had chestnuts in his pocket when he was laid to rest. A mid-tempo offering which has some stunning Spanish guitar splashes, which adds to the overall atmosphere.

The title track `Dance With Me To the Edge Of the World` was composed on the cliffs at Kinbane Castle, where nearby rocky headland has a tragic ‘beauty and the beast’ story.

A Rathlin Island chieftain decided the only way to stop Viking raids was to offer his beautiful daughter’s hand in marriage. When she refused, a brutal retaliation by the Norsemen was feared. Instead the Viking lord invited the locals to attend a feast at Fair Head. Of course, it was too good to be true. In the middle of the celebrations a local servant, at the behest of the devious Viking, danced the fair maiden straight off Fair Head to her death. The track has quite a yin yang feel with the enticing lyrics played against a rich musical backdrop. The vocals have an almost foreboding feel with some superb uilleann pipe tinges.

`Children Of Lir` was written on a boat in the Sea Of Moyle. The swan-myth of this story is famous throughout Ireland, featured in the poetry of W B Yeats and immortalised in the songs of many others. It is a tale that mixes magical elements such as druidic wands and spells with a Christian message of faith bringing freedom from suffering. It`s a really rhythmic and quite beautifully hypnotic piece.

Another song written in a boat, this time in Glenarm Bay comes with `Captain`s Song (Sorley Beat) ` The song refers to the infamous local chieftain from the 1500’s, Sorley Boy MacDonnell, who’s descendants still have strong connections with the Glens of Antrim. A simple but such an effective cut with a strummed mandolin but enhanced by the deep vocals from guest singer, the legendary John Prine.

`Isabella` is based on the fable of Lady Isabella Shaw, wife of Lord James Shaw. Legend has it that Lord Shaw wanted a son and when his wife delivered a daughter, he cruelly snatched the baby from his wife and locked her in a room at the top of the castle. While trying to escape to search for her beloved child, Lady Isabella fell to her death from the tower window. This melancholic track is made more poignant as it was recorded in the Ghost Room at Ballygally Castle Hotel. The harmonies are practically aching with just the heart-breaking lyrics and mandolin accompaniment.

Prior to his sainthood, an enslaved Patrick was brought to work as a shepherd boy on Slemish Mountain and according to legend this is where his own conversion to Christianity took place while he herded the animals, communed with nature and prayed continuously.

So, it`s fitting that the band returned to his volcanic plug to write `St Patrick On Slemish Mountain`, The place has historically become a place of pilgrimage and this upbeat chorale certainly wouldn`t be out of place performed at a service in this place of worship.

A forty second church organ instrumental featuring Bessie McWhirter, long-time organ player at St Patrick’s church follows with `Bessie`s Hymn`. The caves at Cushendun was where `Fair Head’s Daughter` was written. A dark tale of the Viking betrayal as expressed in the previous `Dance With Me To the Edge Of the World` This was a site for two major scenes in the Game of Thrones series. Although the subject matter is forbidding, the song is a pretty stirring affair. The local children from Seaview Primary School sing a brief segment of ‘To The Edge Of The World (Children’s Reprise)’.

‘Black Nun’ is based on well-known local folklore. Those familiar with the town of Ballycastle will relate the legend of Julia McQuillan, also known as “The Black Nun”, who lived and died in the Bonamargy Friary in the 1600’s. The Friary still stands today in ruins. She was said to be a gifted prophet and legend has it that her ghost can be summoned by walking seven times clockwise and anti-chockwise around the Celtic cross, then putting your hand through the hole. It`s a wonderfully rousing song with such an infectious beat and some great harmonic vocals.

The final track `Mind the Road` was written at Glenarm Forest. Inspired by the long and winding roads of the north of Ireland and its dark and tortuous past. It`s a mesmerising and entrancing piece on which to finish.

This was an extremely enjoyable journey lyrically and musically, exploring the landscape, myths and the legends of the natural, untamed and windswept beauty of the Antrim Coast.

The narrated tales are well researched and well written and presented with complementary musical accompaniment from some talented and gifted musicians. If I hadn`t already visited the stunning Antrim coast, it would be top of my to do list after listening to these captivating songs and stories.