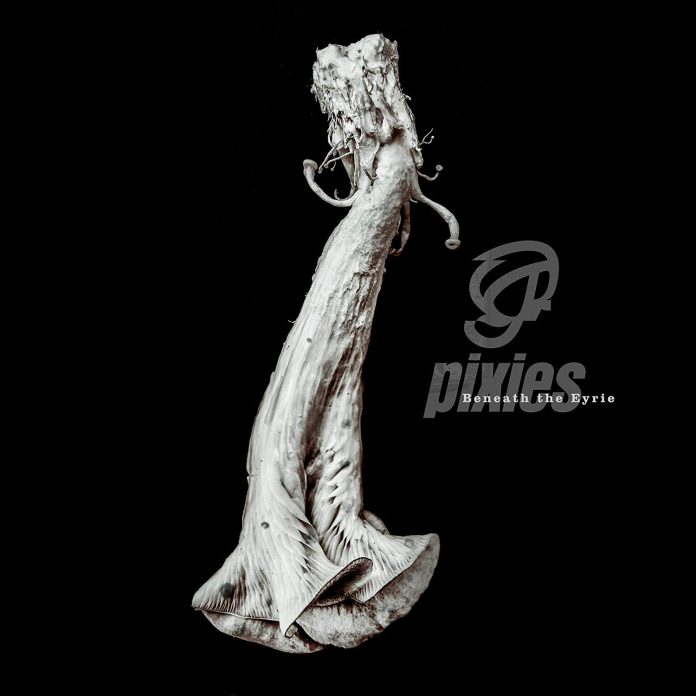 I have always liked The Pixies and saw them a few times before they split in 1993.

I then saw singer Charles Thompson IV as Francis Black solo and with his band the Catholics. The original line up of the band reunited in 2004 before Kim Deal left in 2013 to be replaced by Paz Lenchantin bass, violin and backing vocals.

“Beneath The Eyrie” is the group`s third new album since reforming and is named after the bald eagle’s nest or “eyrie” that drummer Dave Lovering spotted in a tree by some abandoned railroad tracks just behind the studio they recorded the album in.

The album opens with “In The Arms Of Mrs. Mark Of Cain” which feels a little cinematic at times with the vocals almost abstractly shared atop of a vivid pictorial musical background.

`On Graveyard Hill` is classic Pixies beginning with that distinctive bass line and fleeting guitar before guitar bass and drum lay down the foundation for the singer to relate a tale of a witch called Donna casting a fatal curse or maybe a love spell on her unsuspecting lover.

A childhood tale passed on from Black Francis`s father and now bequeathed to his own children is about `Catfish Kate` and narrated from the perspective of Black Jack Hooligan telling the account of how his girlfriend became known as Catfish Kate. Although the subject is a little troubling the lyrics are an illustration of their dark, but ironic sense of humour with a tune that is really brisk, infectious and irresistible.

A story of a drunkard riding the mule trains out of Harmony Borax in Death Valley, high on mandrake root follows with `This Is My Fate` and it`s a strange mix of styles, partially anthemic but almost comedic with a chorus of “take a little more drink” followed by some tinkled cowbells. A song that feels so wrong but again feels so right. Spooky.

I really loved the romantic `Ready For Love`, Francis`s vocals are wonderfully harmonised with Paz Lenchantin and there is a superb psychedelic guitar break midway through from Joey Santiago. A compelling track that will really get under your skin.

`Silver Bullet` relates the narrative of a condemned man wandering the night pursuing a duel to end his internal torment. It has a primitive feel and the sort of orchestral precursor element that Ennio Morricone perfected leading up to a savage gunfight.

Pez Lenchantin’s long-time friend Desiree, a fellow surfer, was killed surfing in a place called County line north of Malibu. The songs `Long Rider` and `Los Surfers Muertos` link references to this tragedy and the names of many other surfers she grew up with or have also passed in the former. The latter tells of a renowned wave called “Killer Dana” that occurred frequently near Dana Point, California. Paz combined the legend of this wave and a notoriously dangerous surfboard called the Long Gun with details of Desiree’s fatal accident.

They are both heartfelt tributes and played out to optimistic tunes. Pez takes the lead on `Los Surfers Muertos` and it`s hard not to be moved by her understated delivery.

`St. Nazaire` dips into the realms of Scottish mythology. The manic, irritated punk searching the streets of “St Nazaire” for a “selkie bride.” a Gaelic seal woman who can return to the sea if her seal coat survives her romantic liaisons. An up front in your face offering full of anger and angst. Indeed, Francis has described it as “A fuck you song” with a jilted lover. Who am I to disagree?

The singer admits that `Bird Of Prey` is a divorce song, “I didn’t necessarily know it at the time, but I do now. It’s a song of longing I guess…it’s about the loss of love.” It`s delivered quite deadpan against a tune that is fairly mid paced. `Daniel Boone` is a dreamy indie pop contribution inspired by the singer almost hitting a reindeer on a foggy drive to the studio.

He imagines a spirit rising from the wreckage that might have been, bound for reincarnation. The album closes out with `Death Horizon` a submission that is an analogy of endings. The death of a relationship, the extinction of humanity by its own carbon smothered hand and the death of the Earth in a supernova fireball. Maybe even the death of the record. Francis offers ‘you’ve heard everything, you’ve heard all of the stories, you’ve heard the songs, you’ve experienced everything, the record’s over now’.”

I have to say I thoroughly enjoyed this album. It had a real maturity about it and addressed subjects that occur as you progress through life such as the passing of loved ones, divorce and reflecting back on life. It seemed a real liberating, cleansing, cathartic submission.

There are also some lighter and surreal moments and their usual dark humour with childhood yarns and folklore chronicles. There is something for everyone here.

I thought this was a teal return to form for the band. Welcome back.