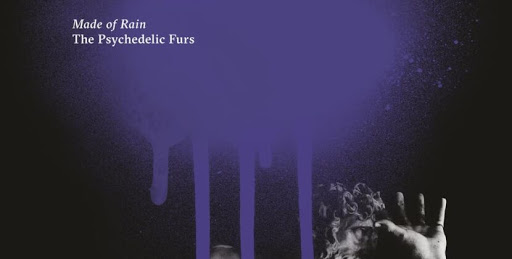 It`s shocking to realise that I first saw The Psychedelic Furs In February 1980 as support to Iggy Pop. John Peel had been championing them on his late-night radio show and the music weeklies NME, Sounds and Melody Maker had all endorsed them. They`d just released their self-titled debut album and I remember being taken aback with their dark and brooding set with its dry ice and slightly menacing aura. I recall them sharing the wonderful ‘Sister Europe` and ending with `India` which seemed to go on forever.

It`s forty years on and they have a new album “Made Of Rain”, their first band release in nearly three decades.

The album opens with `The Boy That Invented Rock & Roll` and it`s as if the band have never been away. A thumping drum, wailing saxophone, guitar riffs, understated bass, synth tinges and that voice deep almost husky shining out. `The Boy` is a real cacophony of sound, a sort of a statement that normal service has resumed. A screeching guitar then a wall of noise introduces `Don’t Believe` It`s a quite anthemic piece with Richard`s questioning lyrics almost spoken at times. The chorus is an ear worm with keyboard player Amanda Kramer`s backing harmonies enhancing the shared lyrical sentiment of wishing, attaining, and then losing something you desired.

We have a real tribal come Middle Eastern vibe to `You’ll Be Mine` possibly from the addition of a Taeko drum and the violin colourings courtesy of producer Richard Fortus. There were some superb guitar shredding and at times it did almost tip it`s hat to the Velvet Underground. There`s a real power rock feel to `Wrong Train`, a number that gathers pace as it progresses. The song seems to narrate to a recognition of mistakes made and the seeming search for redemption or help.

`This’ll Never Be Like Love` is a ballad which has a short saxophone break midway and some blistering guitar riffs along with a resurgence of saxophone from Mars Williams towards the end. `Ash Wednesday` is a similarly laid-back offering which begins with birdsong before the music becomes more expansive.

I felt `Come All Ye Faithful` had an underlying menacing quality about it. The musical powerhouse of Paul Garisto`s drumming, Tim Butler`s bass lines, Rich Good`s guitar inflections and Mars Williams sax overtones set up an intimidating platform for the quite ambiguous vocals.

I have to say I really loved `No-One` with its thumping hypnotic drumbeat, subtle bleeding guitar and Richard`s voice at its expressive best. The lyrics possibly hinting at a religious sentiment with lines such as “Who’s gonna wear your crown no one, and who’s gonna cut you down why no one and get your feet on the ground why no one at all” Wonderful. `Tiny Hands` passed me by, maybe it was just a little too sentimental for my liking. it starts quite stripped back with keyboards and vocals before being filled out by the rest of the band. The subject matter of `Hide The Medicine` is quite dark with hints of substance abuse and it`s familial impact. The song is intensified with a strummed guitar and touching harmonious chorus with it`s hopeful encouraging message.

The penultimate track `Turn Your Back on Me` is a sort of stadium anthem like offering, a little different as it`s primarily synth driven with some crushing guitar riffs interspersed. A number that will probably have venues lit up by lighters held aloft. The album closes with `Stars` a quite optimistic, reflective piece that has a real assemblage of guitar, synth and drums building to a crescendo of sound.

“Made of Rain” is a really interesting composition and quite courageous in my opinion. It would have been quite easy to pander to expectations of radio friendly catchy tunes to suit this throwaway disposable media society but no, the band, collectively have created a thought-provoking piece of work. It`s a submission that will need a number of listens to fully appreciate it but it`s worth the effort. An encouraging and much welcome return from these post punk, art rock pioneers.