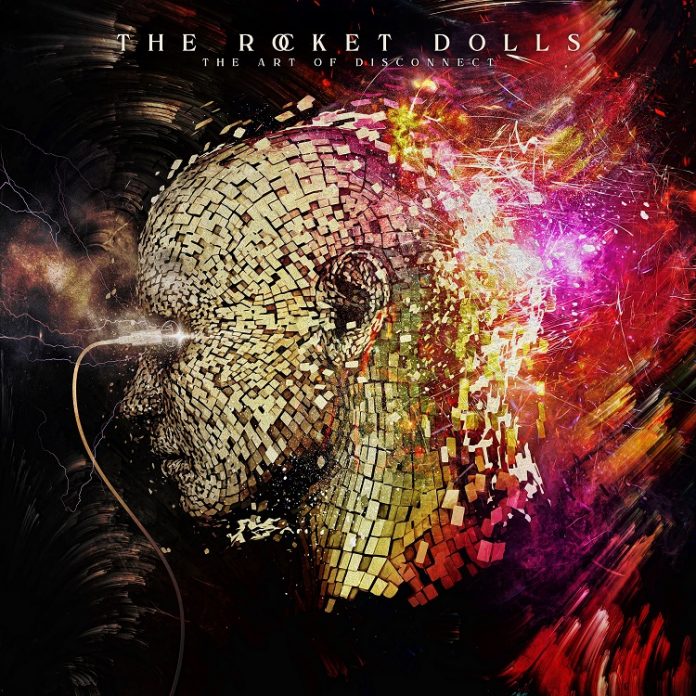 The Rocket Dolls, do things differently.

What I mean is, there are many UK bands, good ones, who are making excellent music, but none of them sound quite like this.

To cut to the chase, I’d wager right now that if TRD were [insert whichever US newbies you like] they’d be on the cover of Metal Hammer already.

Their second record “….Disconnect” starts off in a fashion that not many would. The title track commences with Nikki Smash’s vocals on a piano background. It soon explodes into life, but when it does, it does with the air of a lush soundscape. Strings, huge sound – and make no mistake this sounds like a million dollars – a bass rumble that shakes. Riffs, big thick and downtuned.

To give it a neat hook, then this is arena rock for the club circuit, a little like Empyre maybe, to give it some context of the current crop.

But even that doesn’t tell the story. Not fully. Because The Art Of Disconnect, seems to matter more than the normal album. For one thing it nearly didn’t come out at all. The band were victims of the Pledge Music shambles, which derailed it a little, but for another, the lyrics seem to be like reding Smash’s diaries of the period. His struggles with mental health are laid bare here, that’s for sure, which makes for some uncomfortable listening.

The music of the fabulous “Enthusiasm And Fumes”, which crackles along with a real energy, is juxtaposed by the nightmarish hook: “I am wide awake, I have no tolerance, I cannot take, another night of this….”Likewise, the even better “It Comes At A Price” (opening line “my empathy, is trying to murder me”) plays off against its discordant guitar line, with a real confusion.

The true skill of this is that the trio, completed by Joe Constable (bass, backing vocals) and Benji Knopfler, (drums), have made the music so accessible. Every one of these could be a radio hit, they really could. There’s something of “Beautiful People” era Marilyn Manson about the mighty glam stomp of “The Grip”, and a record called “The Clear Light Of Self Hatred” shouldn’t be an anthem. It is. It even has a bit of the Biffy Clyro about it, and it is the absolute standout moment.

A few years ago there was a band called Zico Chain. They opened for Velvet Revolver if I recall, and also British Lion (for sure, as I was there) I loved them, they had the similar ambition of the massive soundscape of the huge ballads “Grin And Bare It” and “Who I’ve Become”. A pair that in many ways, along with the lush strings of “Habit Machine” form the engine room of this collection, taking the listener on the journey with them, into the maelstrom of the mind, when Smash sings “I can’t let my mind beat me,” then we’re all with him. That is the collectively great thing about this record.

“Slow Motion Ruin” continues the dark path. Indeed, there is a bit of AIC here in the sound, while the absolutely thunderous bass of “Blueprint Of A Breakdown” sees things dialled back up again.

It is typical of the record as a whole that the “happiest” (for want of a better word) thing on offer is called “If I Could Trade Me For A Day”. There are real tinges of last years fine Feeder record in its groove. “Straight Jacket” finds some uplifting hope in the chorus, while the oddly 60s sounding “Stubborn” ends the album on a floating, ephemeral note. Out of context, maybe, with the rest of the record, yet totally in sync with the skill of the band.

Three piece bands often offer something special, no doubt, and The Rocket Dolls truly have, they have delivered something that sets them apart from the pack right now. “The Art Of Disconnection” deserves to find a home.