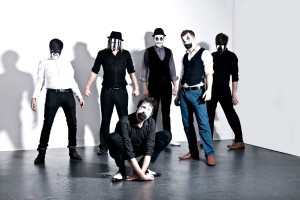 For those new to The Slytones, the Brighton band was formed, or possibly fell to earth, in 2006 as a three-piece hellbent on bringing colour, menace and deviant musical delights to, what was then, an often stale UK rock scene. Since then their number has doubled and although their mission remains the same. Frontman Ashley Edwards has the charisma and chutzpah to pull off the various degrees of schizophrenic blus-inspired avant-garde rock and backed by a band of this quality it can’t be long for the freaks are unleashed.

“Shake the Cage” is a rollin’ and tumblin’ track that comes across part-Doors and part-Tom Waits, if said artists had spent their formative years in a carnival. Influences aside they make their sound their own and the rasping vocals swing to the infectious foot-stomping, tub-thumping melody. It’s got a lot of heart, a hell of a lot of swagger and more than dose or two of raw energy and grit.

“Thomas Thumb” is more laconic than its partner but no less powerful or emotive. It’s a staggering blend of hazy invention in which someone of the stature of an Arthur Brown would be proud. The rattling of drums and the jangled nature of the guitars set an almost hallucinogenic vortex of sound that delights and enthrals with each note.