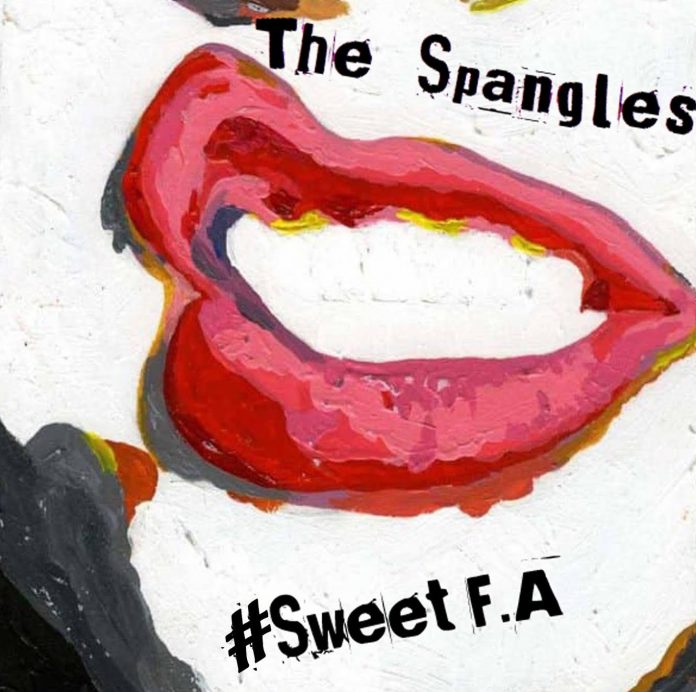 I live my life in a state of some rage or another. It’s just how it is. So when I say “it gets my back up” any of my mates reading this will most probably go “yeah, so does everything else….” But that said, it really gets my back up when I get a press release and the band is “stoked” to give me whatever it is they have  and then spend page after page telling me all about it.

At the other end of the scale are The Spangles.

The Spangles, you see, are a three piece from up north somewhere. The first bit I know because I found them on Facebook, the second I am going to guess based on the fact that they feature members of Idol Dead and Main Grains.

I know that because that’s all that drummer, Ginna (one of the TMG along with JJ of the awesome Psychobabylon and some bloke called McCormack…..), emailed me with. And that’s just fine, because anything else is waffle and nothing about The Spangles waffles. 12 songs. 30 minutes and its basically rock n roll distilled to its finest points. With no excess flab.

Now, here’s the thing. I saw The Idol Dead play live once. They were opening for Richie Ramone, which means they are winning. And I said this about them: “When a band says it is influenced by Dogs D’Amour and Backyard Babies, it’s a pretty good way to get MVM on side. When they then say they like The Wildhearts too, well, we’ve got much to discuss.”

I wrote that in 2015, but I am a creature of habit and those words are just as true today.

So from that, you’ll not be surprised that the record sounds exactly like the sort of stuff I was buying in the Changes One online record store 20 years ago – and what’s more, if it was still going I’d still be buying exactly the same.

This is brilliant. Right from the punk n roll stylings of opener “Growing Up” which helpfully suggests: “everybody’s growing up, I am just growing old” and nails the “maturing” process amongst some screeching lead from Ben (like Cher, they aren’t arsed with surnames), “The Spangles” is special.

It’s the melody on tracks like “The Only One”, it’s the idea of living for pure pleasure that is all over “One Good Reason” – some of the best pure rock n roll since The Yo-Yo’s debut EP (they also had a bloke called McCormack in…..) it is just glorious.

“Dirty Pictures” seems to channel the idea that Duane Eddy liked sleaze, and lets be honest, everyone on this, everyone who loves this, will spot the opening drums to the catchy as all hell “Back On The Meds Again” is the same as “Nita Nitro” just like they’ll love “I Don’t Wanna Go” if they’ve got a pulse.

I’d listened to this a few times before I’d even registered the lyrics are brilliant. “Get Over Yourself” rather acerbically puts down the self-centred over something a bit more classic rock than many here, while “Hold My Hand” mixes the fact it really wants to be Weezer with the fact it has a lovely innocence about it.

“POTUS” is many things, but lovely ain’t one of them. Bonus points, though, for getting the line “a cock like a button mushroom” into a song. If power pop doesn’t get more powerful than “Alone” then its rarely better, and “Here We Go Again” ramps up the punk, before “Ramone” goes full on Rebellion Festival.

The Spangles would fit in there. However its also true they could fit in basically anywhere where people like rock n roll and have a pulse. One of the albums of the year. Sweet FA could win the cup. Someone else would have to help on the open top bus parade though, I suspect these boys might be in no fit state to drive.