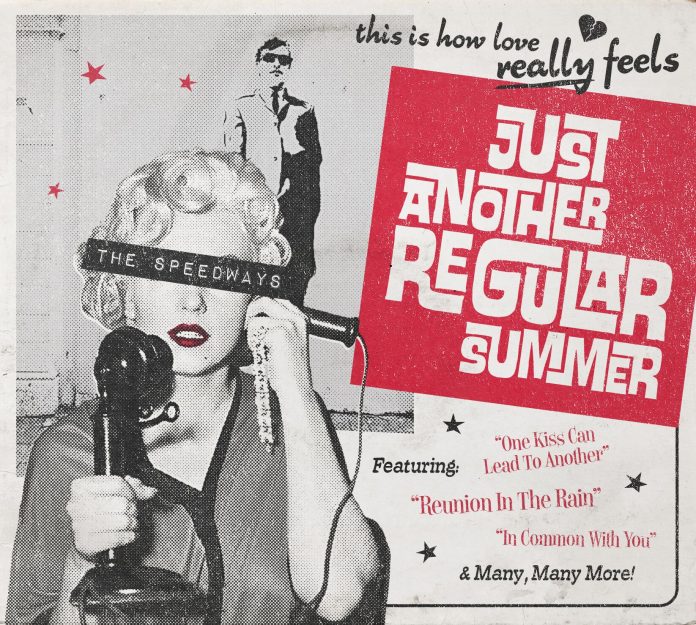 Have you ever stopped to consider the meaning of those words? To me, it’s always meant that I could like anything I wanted, whether its Busted (my love is genuine, deal with it) or Slayer. It never mattered, because, well, its all rock n roll and there are no rules.

That all being said, and meant from the heart, I have from time to time, Dear Reader, hid behind that phrase.

There is a serious point here too. I don’t like writers who afford themselves some greater importance. I have railed against pomposity in all I write. The woman who wants to make you “feel” the music, in her reviews, blocked me on Twitter when I replied, “Really? I just fill mine with references to  The Wildhearts, The Almighty, The Hold Steady and the odd knob gag”.

See, cos its only rock n roll and you either like it or you don’t. …..And also because I can’t be arsed with research.

Which is where The Speedways come in.

It came in my inbox from Rum Bar Records. This means it will rule. Nearly everything they put out does. They are also an American record label.

There were loads of reviews that needed doing around that time too, so when it was released on the date that came with the files, I downloaded it from Apple, and listened.

Now the first thing to say is the damn thing is incredible. Like, seriously good. Like in album of the year territory – if it had actually come out this year. See, the whole rest of the world was giving this 5 star ratings last …..urmmmm (regular) summer.

Which leads me onto the second problem this caused me.  I was listening to this at work the other day and making my notes (come on, you don’t think I was actually working, do you?) and I am merrily giving it: “Elvis Costello and Cheap Trick jamming on Hold Steady songs” (told you I get them in whenever….) “another mighty US power pop band, I wish I was American….”

Then we get to the title track.

It’s got a UK train announcement on. “This is Sloane Square. This is a District Line Train to Upminster,” it says. No matter, its harmonica driven intro is pure Springsteen, Whiskeytown, whatever, they must’ve toured here. Shame I missed them. All things I am thinking.

Then the second verse merrily talks about “footsteps on the Holloway Road”. Now, I am not from London, but I’ve been to enough football matches to know that Arsenal’s ground is just off it.

Ok. They aren’t, are they? They couldn’t be, could they? The Speedways aren’t English?

Yeah they are. Shit. Rips up notes and thinks “it’s only rock n roll but I like it….”, right?

“Just Another Regular Summer” is by The Speedways. They are an English band. It might just be the finest power pop ever produced by an English band, too.

Right from the start of “All I Want” (and the glib response to this is “all I want is to listen to this again”) this is beyond special. The longing in the lyrics, the sweetness of the melodies, the way Matt Julian’s voice melds with Mauro Venegas’ guitar to create the type of alchemy not seen since Silver Sun’s second record (“Neo Wave” was the last time an album of this type by a British band was this good).

Then the keyboards, so subtle, so glorious so wonderful on “Seen Better Days”, and the bass, oh good lord the bass groove that Adrian Alfonso gets. This is unfair, it really is.

“In Common With You” is anchored down by Kris Hood’s drumming, and its kind of punky. In the way that Pkewx3 are, but this is so so catchy. “This is the only time I didn’t know what to do” sings Julian, but he sounds absolutely sure.

On their Bandcamp page it says “1 Girl, 1 Summer, that’s it.” From that I assume it’s a break-up record. I’ll be honest, the piano on “In Her Life” is so gleeful that if it was, they must’ve thought the woman concerned must have been so far out of their league they are just grateful to have had her at all….

The Speedways actually came out of the ashes of an Nottingham pop-punk band (see, I might do research after all, but that makes for boring intro’s….) and that gift for melody is all over “Don’t Tell Me” and the words “don’t tell me that all it worked out, cos I promise that I wouldn’t tell you….” Will resonate with sad-arsed lonely blokes everywhere.

“That’ll Be The Day The Earth Stood Still (Drink The Pain Away)” should be the sound of summer 2020, and the harmonies are as lush as it gets. It jangles, it pulses, it is perfect pop music. I don’t drink, but I get the sentiment in the words.

“Tonight You’ll Find Love” rattles along like The Replacements, and note that “you’ll” find love, not “I’ll”, its subtle, its clever and its true. “One Kiss Can Lead To Another” is a timeless slice of solid gold, “Lonely Girl” is another that adds keys – a lot of them do, and it is another thing that sets them apart from many bands like this – and “Double Shot Of You” is where the Elvis Costello comparison came from earlier, it is straight from his early 80s period and “Reunion In The Rain” adds the tiny little glimmer of hope that we all cling to, that there might be just a little light at the end of the tunnel.

This being a 2019 re-release, it adds some bonus cuts, the pick of which is an utterly lovely cover of Kirsty MacColl’s “They Don’t Know”, not just a timely reminder of what we lost on December 18th 2000, but also I’ve seen Billy Bragg enough to know this: we always do the third verse of “A New England” for Kirsty, somehow it is comforting to know that even now there are blokes that don’t want to change the world, they are just looking for another girl.

The Speedways: “Just Another Regular Summer”. Album of the year. Which year? You decide.