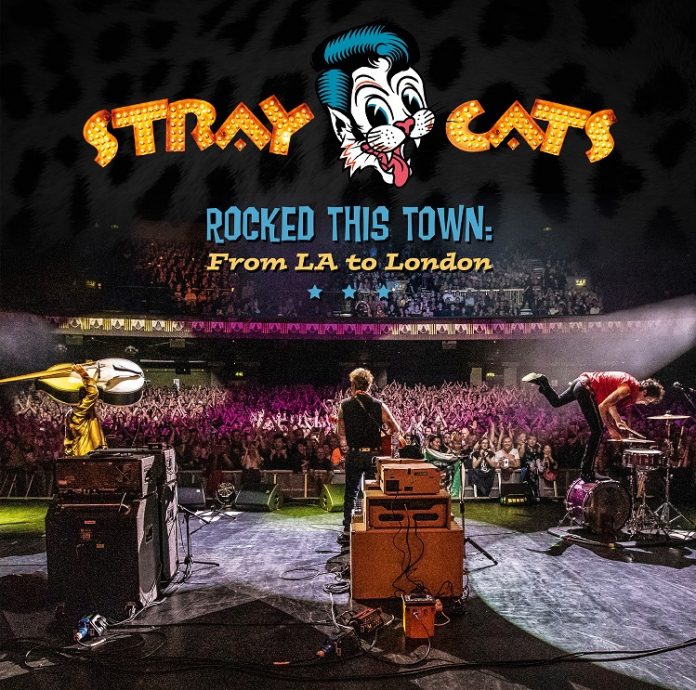 Let’s be honest, no one wants to be reminded that they’re getting older. The awful day when I realised the t-shirt I was wearing at work was bought before some of my colleagues were born was one I will never forget. That said, it is I suppose, swings and roundabouts.

See, for all the people I know that weren’t alive when Guns N Roses released “Appetite For Destruction” (that’s my benchmark) then there’s going to be a load that roll there eyes at this. See, I can pinpoint the exact moment when Stray Cats went from a band I’d seen on Top Of The Pops as a lad to a band I simply had to see live.

On May 17th last year I wrote this in conclusion to my review of “40” – their first album in 26 years: ““40” isn’t a record that requires too much analysis in truth. Just enjoy it with all your heart, because ever since a young kid hot-footed it into Sun Studios to record a song for his mum, rock n roll has been at it’s best when it’s kept simple. “40” is beyond joyous, and that’s alright, mama, it really is. The Stray Cats might just have found the key to eternal youth.”

On June 24th, I’d gone to see them play Birmingham. I’d bought a ticket, and for once I hadn’t intended to review. Just watch as a fan. That didn’t work out, and that night I said this: “I tweeted a picture of this last night as the band came onstage with the words, “whatever gig you are at tonight ain’t as cool as this” and I’ll stand by that, but if we go back to the beginning, so to speak, Eddie Cochrane plays them off again. “Ain’t no cure for the Summertime Blues” he sings. I am not sure, maybe you just need to watch The Stray Cats purr like they did here.”

Beginning with one of the new songs on “40” “Cat Fight (Over A Dog Like Me)” this just taps into an innocence. It doesn’t even matter that if you listen to the lyrics it’s anything but, it just sounds like the very essence of 50s rock n roll.

When they do some of the older ones, “Stray Cat Strut” for example (the one I remember watching on TOTP) there’s just a timeless quality. In fact, I am going to go out on a limb here and say it would be more or less impossible to not like Messrs Phantom, Rocker and Setzer (and if you don’t then I genuinely feel sorry for you that you are so incapable of fun.)

Then there’s the covers and the almost covers. “Gene And Eddy” explodes like it should be the house song at Willy Wonka’s factory, and you know what? When they play “Misirlou” and the likes, you truly get a sense of just how gifted the musicianship here is too.

The fabulous “40” songs are well represented – and rightly so. Lee Rocker sings “When Nothing’s Going Right” but if anything sums up this night better than “Rock It Off”, then I don’t know what it is. Essentially the embodiment of the idea that rock n roll will make everything better, it is the formula of Stray Cats bottled.

It was ever thus. “(She’s) Sexy + 17”) and “Fishnet Stockings” for all the obvious overtones, still manage to sound like they’d only kiss you on the cheek at the end of the night. “Rock This Town” and “Built for Speed” sound like they are out of Sun Studios and still as fresh as daisies and when they get to “Rumble In Brighton” – which they finish the show with. You suddenly realise something.

Those mods and rockers riots? They were 1964. The Stray Cats didn’t form until 1979. This means that just as much as these are my rock n roll dreams, yours too. Then so they were those of The Stray Cats. They just wanted to harness something incredibly cool. They’re still doing it.

In fact, working with Vance Powell (Clutch, Jack White) to make this sound perfect, The Stray Cats have, in “Rocked This Town: From LA to London” made one of the best live albums for ages.