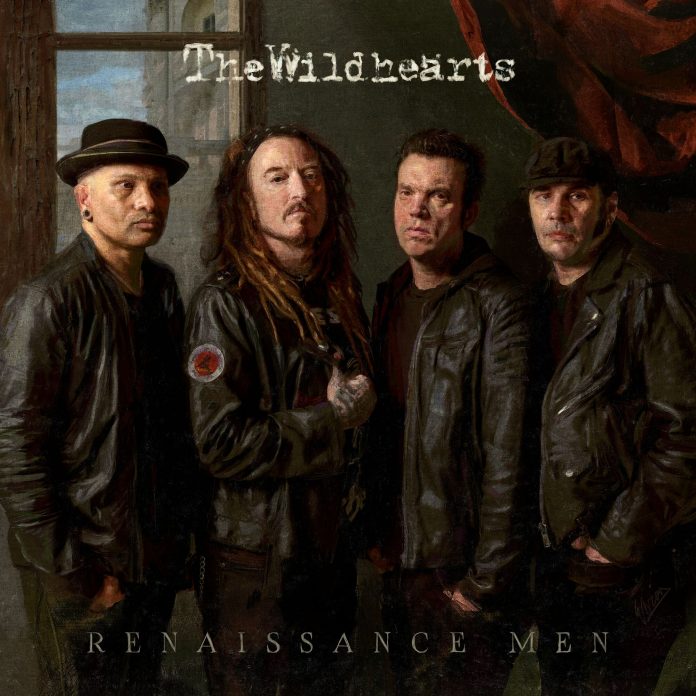 “If this was a movie, it’d be the kind of film I like. Guaranteed offence, that’d see them puking in the isles. Hard-core filth, not a trace of CGI. Nothing like nothing as it should be….”

He knows, surely, that he’s summing up The Wildhearts career, on the stand out moment of “Renaissance Men” but I always wonder if Ginger and the others (and this is the first time in 20 years that the “classic line up” including Danny McCormack on bass has been back together in the studio) know how important that music is to us?

A little earlier in the album there’s a track called “Let ‘Em  Go”, a little punk in its attitude, with the same gang mentality as the Dropkick Murphy’s, but in its chorus there’s a line that goes: “let the wankers find their own. If they’re not with you, you’re better off alone…..”

And for me, more than any other band, The Wildhearts have been with me whenever I needed something, anything. Good or bad. When Stoke City got to the cup final, we played them on the way down to Wembley. When my mum died, it was them that I played when I got home, when my niece was born a few months ago, it was then that I said: “hello sweetheart, aren’t you beautiful? Me and your daddy will take you to football soon. What’s your favourite Wildhearts song?” as my first words to her (we think it was “Caffeine Bomb” because that’s when she gurgled….)

The point here is a simple one, in case you hadn’t guessed – and there’s no point in denying it: The Wildhearts are my favourite band. For 24 years they have been and I imagine for the next 24 they will be.

But that brings its own pressure too. My favourite TV show is “Minder”. The remake with Shane Richie? Absolute bollocks, mate.

“Renaissance Men” is their first album for ten years. However, to paraphrase one of their songs, it’s not like now they’re back, because it feels like they’ve never been away, not really, and not just because I play them all the time either. They play all the time too. There’s that thing, though. Do you stay as a “Greatest Hits” thing, knocking out the first couple of albums as part of whatever anniversary you can find? Those gigs are brilliant too. There was one in Buckley last summer which was the gig of last year, but bands, I guess, reach the crossroads of…well, shall we?

So The Wildhearts did. And good God, and not just because of all the above (like anybody you truly love, you can be honest with them. Believe me, if this was shit I’d say it was shit and still adore the band) these ten songs are astonishing.

When the first track, “Dislocated” was premiered, there was some adverse reaction. Beyond the fact that idiots who hide behind screennames wanted to have their moment, I am not sure why. The irony of the chorus saying “I feel dislocated from your world” isn’t lost, either.

It is true to say that those who are looking “Earth Vs” MK II are going to be disappointed. “Dislocated” is a reasonable indicator for what happens. A mix between the band in their so-called “The White Album” era, with the air of “Fishing For Luckies”, but all mixed in with a harsh sound that recalls their “Endless, Nameless” collection. That is to say, the harmonies are there and they are sweet as chocolate, but this is a heavy record.

The title track has a glam rock feel, but if its bubblegum, then its flavoured with something of a darker aftertaste. “The Fine Art Of Deception” will appeal to all those who collected all the b-sides way back when, and I had to raise a smile when the words: “when you tell us that this is the one, when you tell your friends that you are moving on” are met with the response “bullshit!”, because they’ve helped me through that stuff too over the years when I just didn’t know what do about this loveshit anyway.

The dynamic of CJ and Ginger trading vocals works fabulously – and there really just is some kind of chemistry that these four men have.

“Diagnosis” has a riff that is instantly recognisable as one of a classic Wildhearts moment. The lyrics deal with the treatment of mental health (and anyone who follows Ginger will understand its heartfelt nature).

“My Little Flower” is a typical Wildhearts love song. Sweet, but behind a barbed-wire fence, it is immensely catchy, though. “Emergency (Fentanyl Babylon)” is a vicious condemnation of the over-reliance on prescription drugs, which work itself up into a real punk rock frenzy.

“My Side Of The Bed” largely does the same, but adds more twists and turns in four minutes 17 seconds than many bands do in a career, and amounts to a sort of State Of The Union address. “I saw a phobia of the readers of the Daily Mail” spits Ginger here.

This is not the most immediate 40 odd minutes of their career, it is fair to say that. A couple of listens, however, will reveal the true majesty of a record that ends with “Pilo Erection” and is crushing as the likes of Helmet when it wants to be, but as melodic as Cheap Trick just as quickly, before disappearing into the ether with no warning. It is a jolt of a conclusion, yet absolutely in keeping.

“We are the renaissance men, back in your face again” says the chorus of the title track – and that is true. But the real test is this: if someone is sitting in a bar waiting for a band to come on, just like I was back in 1995 and heard it, would they go on their phone to find out who it was (I had to ask the DJ, but things change, go with it)? The answer is yes. That is, if they wanted  to hear the most challenging, uncompromising, intelligent, catchy and downright brilliant rock n roll that they ever will.

Rating: come on, what do you think?