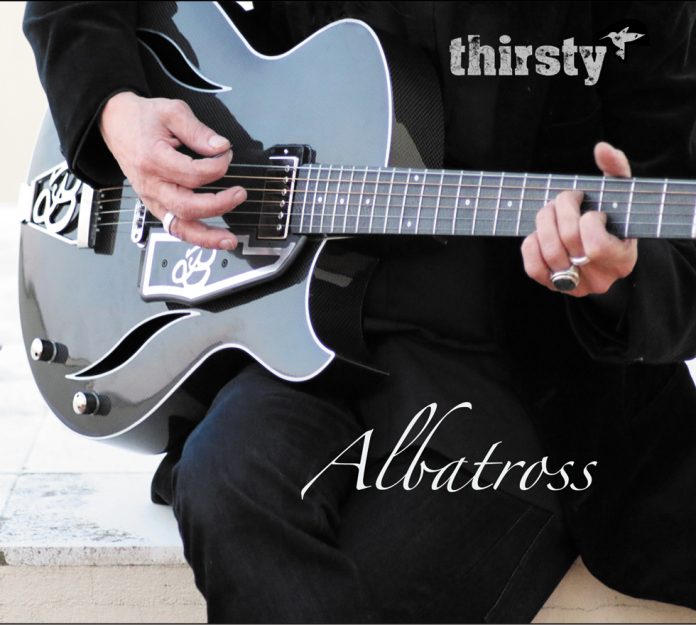 One of 2016’s quirkiest? Yeah maybe. Great though!

On the face of it, a collaboration between two of the Quireboys’ earliest members, a Russian poet and Death In Vegas’ drummer should be….well…..it should be absolute rubbish really, let’s be honest.

Except that already on their debut album, Thirsty have proved they were rather good. And now, on album number two, they are even better.

Because, however strange it sounds in principle, then the actual fact is that if the Rolling Stones had fancied exploring something a little darker on “Exile On Main Street” it’s highly likely they’d have come up with something a little like this.

It is work like this that convinces that  Thirsty isn’t the vanity project that it might have been. This is a loose-limbed, laid back record that is well crafted and supremely entertaining.

“Albatross” – although its first track “The Albatross” is based on “The Rime Of The Ancient Mariner” (didn’t some other band do that once….?) is a bit less arty than its predecessor, more focussed on being a rock n roll record than a cultural experience. “Chaos” makes its point in a pretty classy fashion, and the brilliant harmonica lick of “Orlando” takes things into more familiar territory for a couple of the players here.

Guy Bailey and Chris Johnstone have a musical chemistry going back close on thirsty years from their days in The Quireboys, but they still have the capacity to surprise here. Bailey’s guitar playing was always better than people thought and now his breathy, earthy vocal delivery – somewhere close to Lemmy singing a Dogs D’Amour song – is perfect here, while Johnstone’s work is perfectly understated, meaning the dark jazz influences of “Say It Say So, Joe” are right to the fore.

Many of the songs here – not least of which is the undoubted highlight “Black Hole” – benefit from the considerable presence of Lynne Jackaman.

Jackaman, who has proved her talents in St Jude and her eponymous band does so here too with her well-chosen backing vocals, while Irina D, who is the woman behind the lyrics here sings on a few too, “Beat Of Her Heart” is essentially a duet with Bailey and the contrasts between the two are wonderful.

One of those albums where you don’t really have a clue what the songs are about, but however incomprehensible “Va Banque” with its almost spoken delivery, the gentle “Shore Of Light” or the almost funky “Parliament Of Fools” might be, they are all undeniably superb songs, and even when things get soulful for “Cosmic Aphrodite” (sung mostly by D) there is a real class about things.

“Patriotic Little Trash”, which concludes the issue doesn’t really change the tone and has echoes of Keith Richards’ solo material, but what is interesting about it – and indeed all of its brethren – is there’s very little over three minutes here. Perhaps as a nod to a bygone time, and certainly it is a very late 1960s/early 1970s vibe that pervades throughout, but perhaps too in a desire not to let this become the jam noodle that it might have been in lesser hands.

Surprising in a of ways, and surprisingly focussed, Thirsty are a tastier drink than you might think.