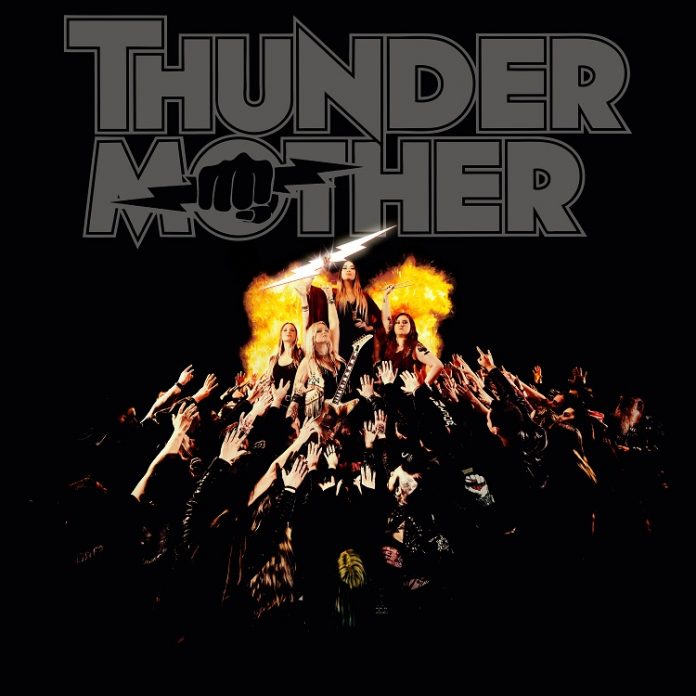 It’s something of an irony that I am reviewing “Heat Wave” on the hottest day of the year so far – it’s ok, I am English, so it’ll rain tomorrow or at the very least there’ll be a thunderstorm. No, rather listening to Thundermother rumble through these 13 songs, you find yourself absent-mindedly wandering while its on thinking “these would be ace at a festival and wouldn’t it be ace to be at a festival today!”

The Swedes know it, too. They’ve even got a song dedicated to that very thing. “Into The Mud” is the second track on this – but crucially it also says this in the hook: “nothing stops the mothers coming through” and, on the basis of the 50 minutes or so here, I haven’t found a reason to disagree.

Although their fourth record, it is their second since Filippa Nässil had a clear out, and working with Soren Andersen – the guitar god and producer that Glenn Hughes works with – hasn’t half helped their sound come on in leaps and bounds.

“…Wave” is their best album almost from the second that “Loud And Free” kicks in – or more appropriately perhaps, from the second it kicks the doors down. There’s no messing here, not an ounce of fat, just rock n roll. An AC/DC riff might have you thinking “ok, I’ve heard all this before” and maybe you have, but not only are Thundermother brilliant at it, but they are in possession of a real deadly weapon.

Singer Guernica Mancini has an incredible voice. To call it a “powerhouse” is to give it a cliché it doesn’t deserve. What it means, though, is when she roars “I’ll drop you like a bone and take your heart” on “Dog From Hell”, you wouldn’t bet against her doing just that.

The music on that one is Airbourne-esque and that’s cool, because Joel and the lads do this kind of stuff just fine too.

“Back In ’76” is equal parts Kiss and Joan Jett and it works because it’s a homage to the arena rockers of that era – indeed it is all pleasingly ready to forget any trend. The title track is a fists up in the air thing too, in truth most of them are.

Which means that “Sleep”, the ballad, is a stark change. But it is more empowering than that. “I won’t change to please a man” seems to frame the whole record, not just this track, but elsewhere the message is more subtle – more “get up and go for it.”

“Driving In Style” has a bit of a Van Halen vibe, but is more turbocharged, and in the interviews surrounding the album, the band have talked about “Free Ourselves” as being their favourite. You can see why. “Hey everyone, have you heard the news? Rock n roll is dead and I am singing the blues” is the tongue in cheek first line, and the idea of shaking off the shackles runs deep.

“Mexico” could have been on an early Aerosmith album, a dirty blues riff, “Purple Sky” is more Hendrix, almost, but somehow they seem happiest on the “Back In Black” type soundalikes, like “Ghost”.

Thundermother are brilliant at chugging along, and “Somebody Love Me” on which Mancini is especially good, even for her is all the proof you need. And the last one “Bad Habits” (key line: “sometimes I lie cos the truth is boring”) is surely the one that will be the encore. And at a raucous, beer soaked gig (and we will have them again, surely?) it is going to sound amazing.

On the press release they sent with the album, it simply said this: Thundermother don’t just play rock’n’roll Thundermother are rock’n’roll, and honestly there is no better way of putting it. “Heat Wave” will get you hot and sweaty, and that’s the point.