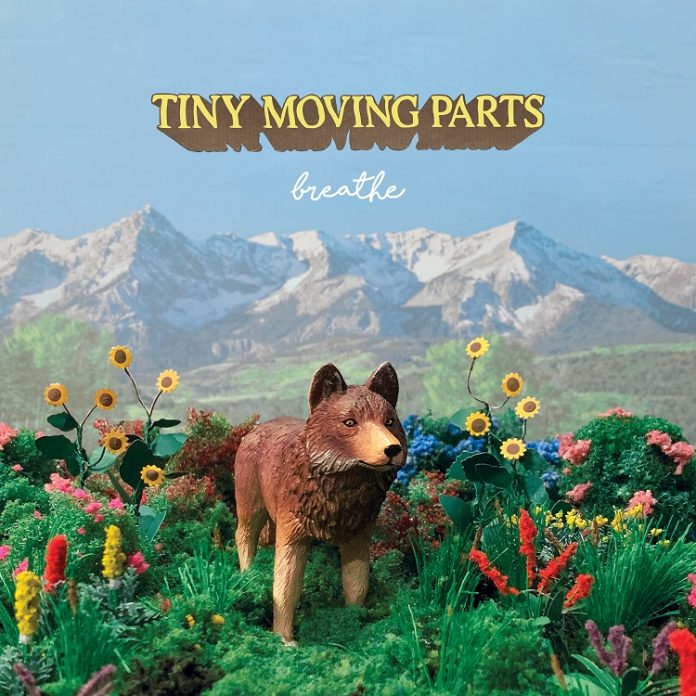 Tiny Moving Parts is a self-described family band consisting of brothers William Chevalier (drums) and Matthew Chevalier (bass, vocals), and their cousin Dylan Mattheisen (guitar, vocals). The trio started playing together in junior high and have been together since then.

Dylan Mattheisen is fearful of his mortality, a factor that has formed part of every album the Benson, Minnesota band has released so far. Their seventh album” breathe” has a set of songs designed to help quell those anxieties. The band relate “It’s about finding that mindset to keep on powering through.” Breathe‘s title was chosen because, when the trio were thinking of a name, it was the one word that kept jumping out from the lyrics, a kind of subconscious reminder about the thing we all do to stay alive.

`The Midwest Sky` kicks off the album and it`s a noisy kind of mix match of music with some pounding drums and nice guitar riffs throughout. It`s quite stop start at times with relatively positive lyrics shared atop, seemingly dealing with the need to ensure that a relationship is still viable. There`s a nice chugging guitar riff throughout `Light Bulb` Again it`s has it`s stop start or fast slow moments with some fairly upbeat prose such as “I`m nothing special but I try to be” Mattheisen has struggled with mental health issues and `Medicine` is a song that he has written about it and the way he focused on the positives to cope. It`s also a really catchy three-minute indie pop tune with some wonderfully intricate guitar inflections.

`Icicles (Moving Glow) ` is another personal piece penned about overcoming loss through the power of friendship. It`s musically intense bordering on antagonistic. There`s a real change of pace with the heart felt `Vertebrae` Apparently it`s the guys first ever acoustic track and interestingly featured a banjo solo in the last minute or so. It`s a nice melodic piece with some cleverly crafted lyrics. `Polar Bear` returns to a more aggressive in your face challenge musically with some quite shouty stanzas.

A song that seems to counterattack the singer’s fear of death follows with `Bloody Nose` and it`s in a similar vein to what`s passed before. Although `Soft Spot` gives the impression of musical confrontation, it seems to be almost a love ode. `I Can`t Shake` details the first time Mattheisen remembers having a panic attack. He recalls “I was a 20-year-old having a stressful day, getting ready to play a coffee shop in Baltimore,” he says. “We were told we wouldn’t receive any money, but there was free coffee for the band. I felt pretty out of it and decided to drink a whole bunch of coffee, which resulted in a caffeine overdose. To this day it was one of the scariest moments of my life. I remember splashing sink water on my face multiple times in the bathroom trying to get out of this state of mind, but I couldn’t for quite some time. But there was nothing bad happening around me – it was all in my head.” The song although recalling a difficult situation is quite melodic with some catchy harmonies. The album concludes with `Hallmark` which according to the band addresses the small comfort, whether real or false (or perhaps both), that a Get Well Soon card can bring to someone dying of cancer. Another quite congruous piece with some spiky edges.

“Breathe” is an interesting album. It seems to encompass the sound of a band coming to terms with their own impermanence, their concerns, their self-doubts. It’s a reminder that we are never alone as long as there are bands that can offer songs sung as if their lives depended on them. There are some delightful harmonies and melodies throughout, balanced with some sharp and more belligerent interludes. Mattheisen`s vocals range from lovingly tender to loud, forceful and angry, allowing a rich and varied feel to the album. There is much to be enjoyed with this release and hopefully it was quite liberating for the band in addressing subjects that have had a significant impact on their lives.