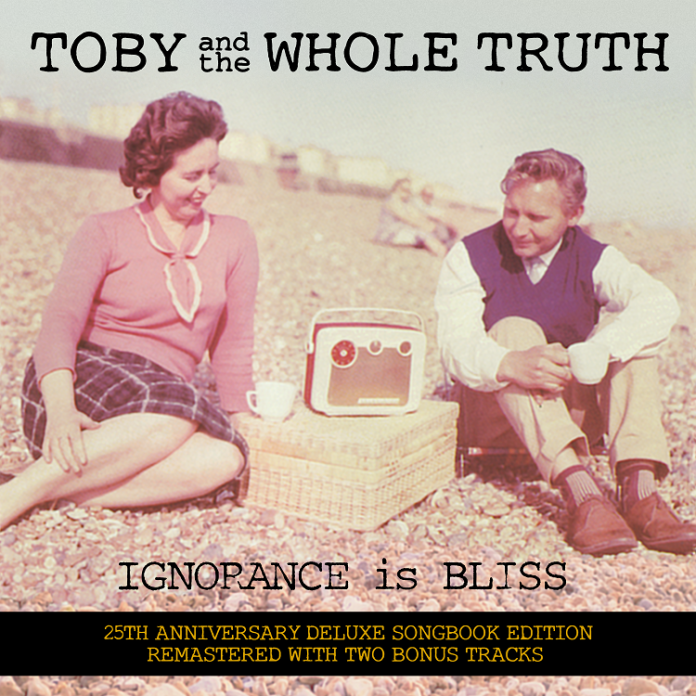 Let’s get the cliché out of the way, shall we?! 25 years, blimey, how can it be that long?

There, I’ve done it.

Right, now onto the stuff I actually want to say about “Ignorance Is Bliss”.

I actually bought this album twice. On tape the day it came out, then I found the CD maybe 10 years ago at a record fair, and listened to it again, so it isn’t quite the voyage of (re) discovery it is for some. What is true, though, is I like the record a lot more now than I did when it came out.

Allow me to explain: See, Toby Jepon is one of the pillars of my musical history. Little Angels – along with The Almighty, Thunder and The Quireboys – were the four British bands that taught me that rock stars weren’t always from America.

LA were special too, because they were (roughly) our age. They were the first time rock bands weren’t untouchable. They were like us. And they were brilliant. Genuinely incredible. I can vividly remember in 1991 as a 16 year old while all the kids in school were telling me that Nirvana were the coolest band in the world, I was explaining to anyone that would listen that the “Young Gods” record was way better (an opinion I still hold to this day) and I can remember “Jam” going to number one a couple of years later and seeing at as a vindication for all of us. Put it this way, when I went to see Van Halen in 1993 or so, it was the support, my boys Little Angels that I really cared for.

They were, of course, to borrow a line from their best of “Too Good To Last”, which brings us to Toby Jepson And The Whole Truth and specifically “Ignorance Is Bliss”.

A year after LA called it a day, he returned with this. Mixed in Bryan Adams’ studio, and listening to it now, with my tastes and in my mid-40s, its phenomenal. A magnificent collection of songs. Back in 1995, though, it didn’t sound much like Little Angels. That pissed me off (oddly, hearing it now, of course there’s a shit load of Angels in it) and its no offence to Toby, but when you love a band, they feel like yours and you don’t want to see them with a new look.

But its time for a reappraisal. Because from the second “Some People Are More Equal Than Others” kicks off, its way better than you remember, trust me. That riff – the one he likes so much that he uses it on his Podcast as the theme song – is huge and the lyrics are superb. Staggeringly – and rather upsettingly – arguably even more relevant now, it is a brilliant song.

These days, its charm is the chances it takes – but as I say, that’s the passing of time – the bluesy, laid back “Better Off Without Me” is, like many, flavoured with a sort of latter period Beatles taste, and “Slipping Through Your Fingers” chugs along in the shadows.

The bass of Roger Davis anchors that one down and the musicianship here is top drawer. Mostly its mid-paced (I remember opining at the time that it didn’t “rock”) but its subtleties are obvious now. “Haven’t Got The Strength” for example is bravely pushing the boundaries, and the balladry here like “The Wind Blows Hard” has a real skill.

There are some real interesting rhythms here too: “All Heal In Time” is and the dark “I Won’t Be With You” build very much in their own way and on their own terms – the latter actually rivals the opener for the crown of best thing here – and the guitar work of Jepson and Russ Godwin is excellent everywhere, but it really works on this one.

It strikes me now that if you didn’t know this was 25 years old and just an album from “the bloke that sings in Wayward Sons” you’d never guess from listening to “Save Me From Myself” or the sun-dappled and reflective “Out Of Sight, Out Of Mind”. Timeless? Maybe, or ahead of their time? Take your pick.

“Harder All The Time” gets more funky, but viewed in the context of the times, it doesn’t have a lot in common with the Terrorvision’s or The Wildhearts of the world, instead, you can just about see it on “What’s The Story (Morning Glory)?” or something, while as if to prove it was all still in him – and maybe to rebuke the fans like I was – “Open Your Mind” finds a kind of Stones’ like sneer (and is maybe something like the work he did with Gun 15 years or so after?)

Of the two unreleased songs that finish it, “Get Your Feet On” continues the rock n roll vibe, while “Spiritually Bankrupt” is a prescient ballad, worrying about where we were going then. Who the hell knows now, either? These sound like they belong on this album though, they are not the filler of demos and half baked ideas many might have put out.

Listening now to “Ignorance Is Bliss”, it’s a brave departure, but its more than that. It’s a fabulous one. And the work of Simon Francis in restoring it, ensures it sounds wonderful to match. A review that began with a cliché might as well end with one, right? This is every inch a lost classic, it really is.