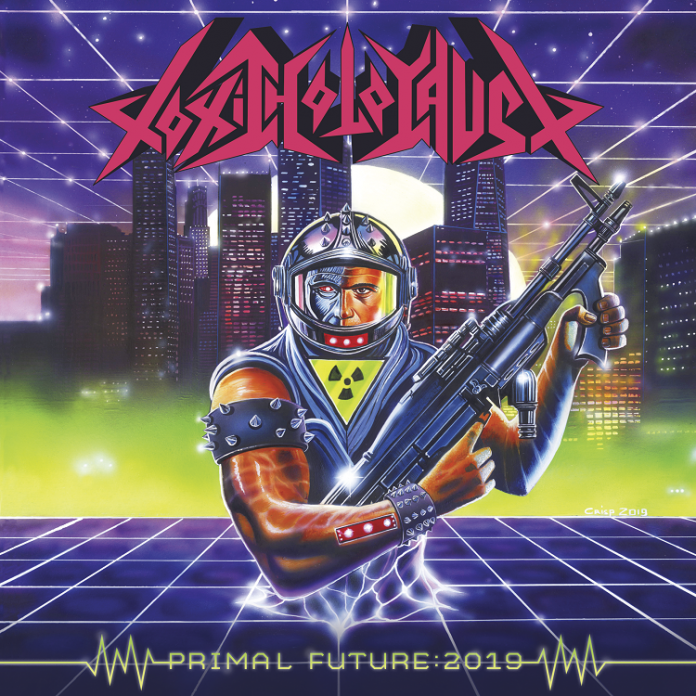 I am in awe of many things in this world. But one man band’s? Dear me. They’re ridiculous.

How do they do it?

Such a thing is enough for me to cast Joel Grind as some sort of genius even before you actually listen to Toxic Holocaust.

“Primal Future 2019” actually finds its future by going back to its past. Because Grid started this band in 1999 with the aim of doing DIY thrash metal like the greats.

Over the years its expanded here and there. They’ve done albums with band members, but this one is right back to the roots. Grind plays everything here.

And moreover, it sounds like the early stuff too. Raw, punky, brutal, and dystopian and nihilistic.

It’s also his best album in a long, long time.

“Chemical Warlords” which begins a journey into a scary assed world, suggests you “take one taste to open your mind”. The trip (see what I did there?) you then take is pretty violent, and pretty unpleasant.

Technology taking over – I am guessing, I am a philistine when it comes to concepts, only caring if the songs are any good – drives the record as a theme, but there is a barren bleakness about “Black Out The Code” and such is the classic, primal thrash feel about “New World Beyond” it almost begs it to be 1983 and to form a circle pit filled with hi-tops.

“Deafened By The Roar” is 100% hardcore violence. Simple as that, more Madball than Metallica, it is vital. Absolutely insistent and it demands your attention, and if at over four minutes long “Time’s Edge” is almost prog in this context, it is more than happy to bludgeon you for all that time.

The title track is an interesting diversion, because rather than the outright beatdown the rest give, this one lurks in the shadows ready to knife you in the back for pure fun, it seems. Asking you to “pray for death” and suggesting it is “disgusted by the human race” is the vibe here and Grind sounds especially guttural.

Iron Cage”, is built for slamming, and it actually mixes thrash with a Motorhead type vibe, “Controlled By Fear” takes a different tack and suggests that “blind faith keeps you down” and possibly if you believe in nothing, then you are free to do anything? That seems to sum up the score of this collection, certainly.

“Aftermath” thunders by on a bass groove that summons up all kinds of hell, while the closing “Cybernetic War” basically just sounds better – and more authentic – than nearly all the competition.

The name Toxic Holocaust really gives it away. I saw a Twitter exchange the other day about the new Nick Cave record, and one bloke asked another if he’d heard it.

“No,” said the first. “Is it any good?” Second fella says: “well he’s never going to get Christmas number ones, is he?”

And there’s a similar feel to “Primal Futures 2019”. You know what TH and Joel Grind are going to do. They just do it so well.