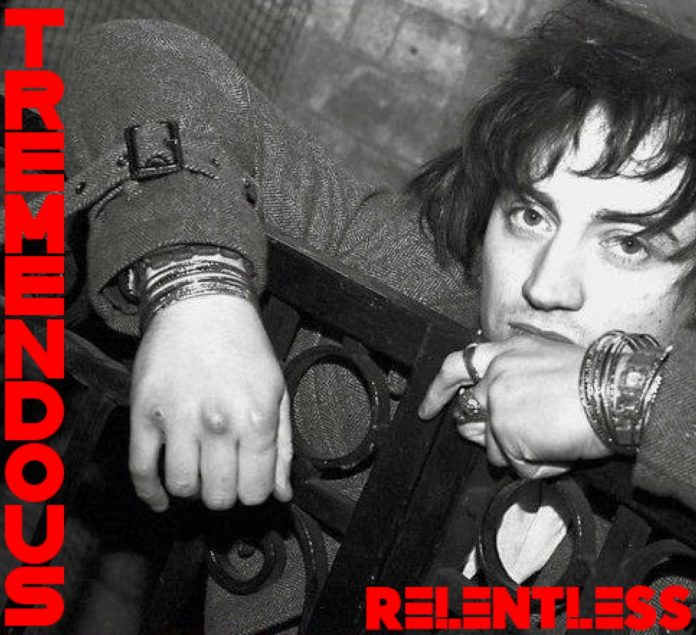 “Loved It, like the feel” – just five words, but keep them in your mind when you read this.

Then add in the fact that they were uttered by Syl Silvain, an actual New York Doll, and that might tell you what you are dealing with here.

Also the title of the album. “Relentless”. Honestly, in all the years I’ve done this website, I’ve never received as many emails about an album as I did with this one (at least not without telling the person sending them to do one sharpish). From this we can infer two things. First, they really believe in the project, and second, that the album was so good it was always going to get reviewed.

From the industrial heartland of West Midlands. I worked in the place where Mark Dudzinski, the singer of Tremendous (and he of the emails….) was born for five year, and there’s not a lot of laughs (there was an ace sandwich shop, to be fair), which is probably why this sounds like an escape. Everything about this; the shining pop hooks, the choruses, the solos, hell even the ballads, screams one thing: rock n roll fantasies.

“Don’t Leave Our Love (Open For Closing)” takes 22 seconds to reveal itself. That’s exactly how long it takes for the guitars and harmonies to kick in. It’s as simple as this really: if you like Last Great Dreamers, get on this. It sounds like a song they should have put on “Retrosexual”.

Where this scores over some of the more obvious peer group, is that it is happy to slow the pace. “Like Dreamers Do” comes in second song with some piano that would please Small Faces fans, before Dudzinski screeches in with a guitar solo.

An experienced hand around rock n roll, Mark, Ryan Jay on bass and Dave Ryan on drums, have come up with a record that sounds way more advanced than a debut. “Rock N Roll Satellite” even has a bit of indie floorfiller about it. Think Oasis when they were rock n roll stars.

“Bag Of Nails” is an interesting one, primarily because like those other Black Country Vagabonds, The Dog’s D’Amour, they want to play with the formula. This one is a proper ballad, but like the rest, its in and out and hooky as hell.

“Daniela” is perhaps the highlight. The way it starts slow and gets full on Trash ‘n’ roll, like something Vain would have done on the seminal “No Respect” album. That’s not to say, though, that anything here is less than great. “Take A Good Look At My Good” is another that shows the ambition here, this is not something that merely wants to rehash the past.

“Heart Sinker” was the single for a reason. The rest are catchy. This one you need testing for. “You give love heart disease” snarls the chorus – I think I worked with her in Blackheath to be fair – while “Fighting To Lose” keeps the punk spirit going. This was sniffing glue right before it came on, frankly. Two minutes of filth and fury.

“Hell Is Only A Blessing Away” sounds as snotty and raw as Ash did in the early days and the last one “Copycat Killer” stomps about like a three year old after a two day Skittles bender – you can imagine this one going down a storm at one of their gigs.

Everything about this album can be summed up with one word: “class”. Gavin Monaghan, the famed producer who has worked just about everyone in the Midlands from Editors to Robert Plant, has picked another one here. Three piece bands always sound perfect when they get it right – like left footed footballers, they just seem perfect and here, they live up to the band name.

“Loved it, like the feel” – if its good enough for a New York Doll, then I’ll steal it, thanks.