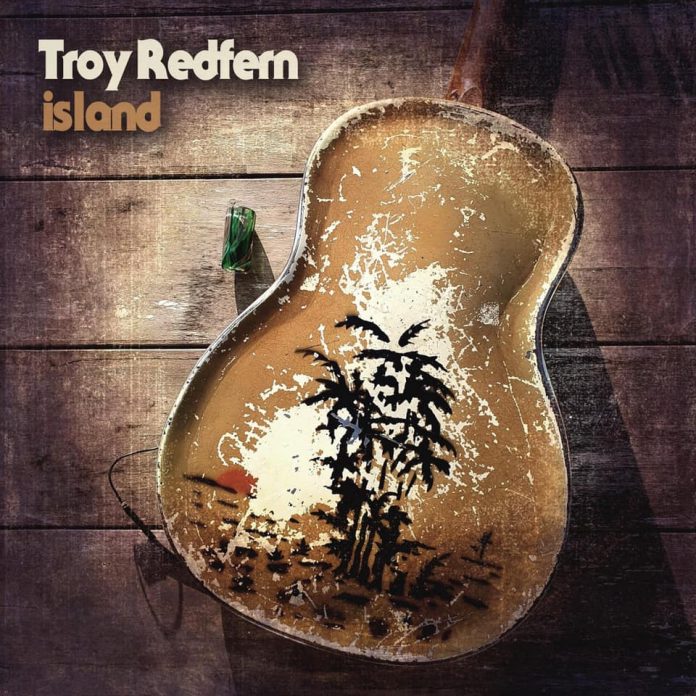 “They say that no man is an island. And good things come to those who wait. But the things I hear are there. Just to remind me…..”

Those words are from “Santa Fe” a song on Jon Bon Jovi’s solo record “Blaze Of Glory”. It came out in 1990, and given that I haven’t listened to it for about 15 years, it was odd that the first thing I should think of when I got this from Troy Redfern and saw the title, was that verse.

But, we are where we are, and you’d best believe I intend to torture the life out of the metaphor, and actually, in truth, I think I can here.

Because, what used to be a communal experience, that of going to a gig, or in the case of this record, going to the studio to make it, is increasingly becoming a solo one. We either watch online at the concert these days, pretending we are part of it on zoom or whatever (cards on the table here, I am steadfastly against this and I haven’t watched one, and have little plans or inclination to so do), so we are, truly becoming our little Islands, and the things you hear are there to remind you, of….well what? What exactly?

It sounds like Troy Redfern has been musing on those thoughts himself, because “Island” was predominantly made in lockdown, and it not only sounds spontaneous but ambitious and reflective.

He’s a formidable player – as anyone who saw him on his recent shows with Wille and The Bandits would testify, and if you haven’t heard him before, then the fabulous slide guitar driven, country flavoured “Doin’ Time” will be all you need to know to draw the same conclusion.

With this, though, that doesn’t even begin to tell the story.

When you are alone with your thoughts and two vintage guitars, there’s a lot going on. This half an hour is far more wide ranging, indeed, than you’d imagine based on the snapshot of just the opening song.

“Falling Down” is acoustic, by turns swooning folk and skilful slide, and he follows that up with the first of the instrumental ones. “Call To Prayer” sounds as dry as the Middle Eastern air too, as it plays out, and when it is counterbalanced by a kind of primal take on the traditional standard “John The Revelator” things take a southern gospel turn.

The title track is rugged and windswept, you can think of Mark Knopfler’s solo work here, perhaps, while the country, roots (call it what you like, really) vibe that is never too far away on this, is right to the fore on “Hallowed Ground”.

It’s the instrumental ones that are perhaps the best, though. Listening to them, as I have over the last few days, you can lose yourself in wordless wonder at the lovely “Era’s End” for example, and for 90 seconds or so “Fighting Forms” transports you to big sky country, with Chris Whiteley, as it were.

There is something of the Americana dirt roads about “Lay My Body Down” and whoever “Emma” is, the sense of longing for her comes over with crystal clarity in the last song. The cliché about guitars and gentle weeping needs to be invoked with this.

It concludes the record in a gorgeous way too – and “Island” is a record that if you invest yourself in gives full and varied rewards. And you’ve got the time to do that, after all.

That Jon Bon Jovi tune at the start. You know what the last line of the verse was, right? The one I didn’t put in? “Every dog will have its day”. And when Troy Redfern can get out to play these songs to people, you bet your life he will have his.