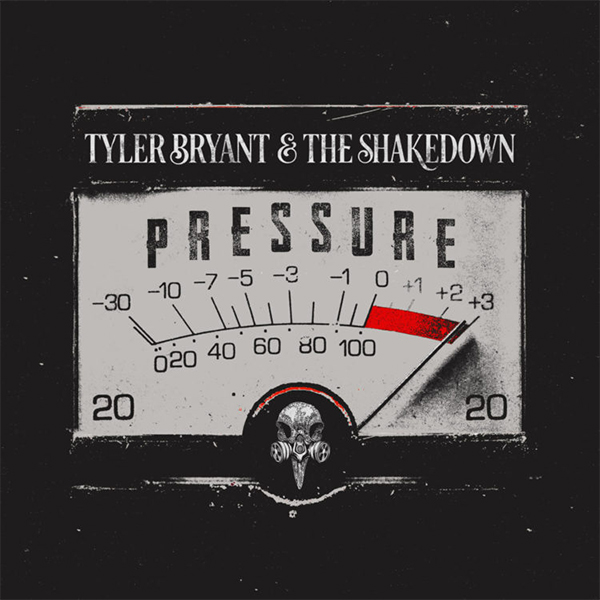 There’s been about one good thing in 2020. The idea that bands have replaced gigs with albums, at least has provided some light in a world where we pretend “live streams” are “live shows” (I admit I still haven’t watched one, I just can’t).

The latest in a long line of these things is “Pressure” from Tyler Bryant and The Shakedown. They relocated to the basement for this (as a three piece, with Bryant handling bass duties) and they got to work.

Initially just on one song. “Crazy Days” (which features Rebecca Lovell of Larkin Poe), a kind of anthem for the times. A mid-paced blue collar rocker, halfway between Tom Petty and an arena filler, it sowed the seeds. Maybe it was its pay off line “maybe something crazy’s what we should do…..” that convinced Bryant that this one song should become an EP before the ideas flowed and that EP became this album. Who knows? Just be glad it did. Because “Pressure” is superb.

I’ve seen Tyler Bryant live many, many times. In stadiums, in mid-sized places and in his own club shows. Every single time he and the band have been magnificent, the sort of outfit you see and have a kind of evangelical need to tell everyone about – and it is also fair to say that as great as their recorded output has been, it maybe has never sounded quite as raw as the shows. Until now.

The title track starts with a kind of plaintive wail, and the groove, oh man the groove! Whether he’s been around long enough for a “signature sound” I am not sure, but this is it. The guitars screech and this one is for real.

The thing is about Bryant, and he’s always been the same, is that whatever he does and wherever he takes the music, it always sounds so primal. “Hitchhiker” for example is blues, but it sounds like he did a deal with the Devil then Beelzebub got scared, then the bass intro for “Backbone” has a hint of “Money” by Pink Floyd about it, but only to prove that money is the root of all evil.

“Holdin’ My Breath” (apparently written way before the world went to shit in March) takes Charlie Starr of Blackberry Smoke out of his comfort zone a little and sounds incredible, and even the ballads here sound truly like a cry for help. Where sometimes a “love” song can come over like the singer wrote it in five minutes in the shower because he had a box to tick, “Like The Old Me” appears to mean every word of its despair.

“Automatic” adds a proper slice of sleaze, the country tastes of “Wildside” might be the best thing on offer, because of two things. First its chorus is stupidly catchy, and second because he basically renders this review pointless with this line: “wasn’t born to fit inside a box, wasn’t born to hush, I was born to rock” And you know what? It’s essentially impossible to disagree.

There is a kind of indefatigable spirit running through the whole record, so that as real as the emotion of “Misery” is, it is followed with “Fuel” as if to say: “we will not be beaten whatever you throw at us.”

“Loner” is perhaps the one moment of tenderness as opposed to raw reflection, and “Fever” is one more that will sound mighty when (if?) they ever are allowed to play it live.

Ending with “Coastin’” is interesting too, given that it has the air of a bunch of mates jamming on the back porch (and perhaps in a great many respects that’s what this was?) but at the same time, this album sounds anything but like it was a band going through the motions.

In actual fact, “Pressure” is what happens when Tyler Bryant And The Shakedown have the pressure taken off, and might well be the best thing they’ve ever done.