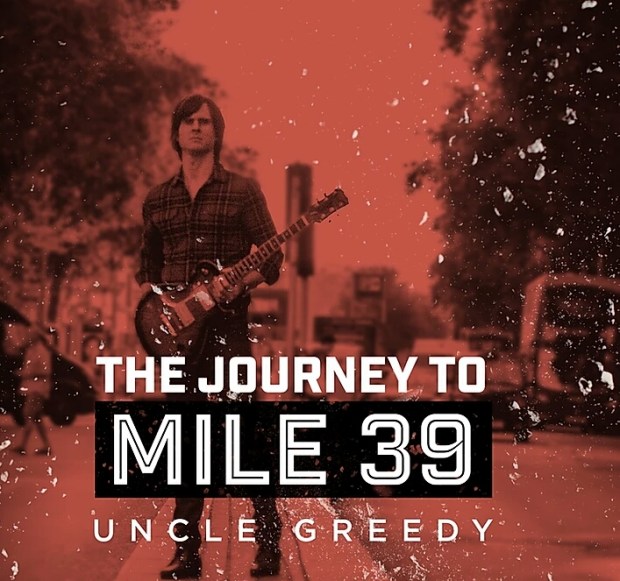 Uncle Greedy is proof that there is hope for us all.

Well, when I say “all” what I mean is: “blokes of a certain age, who like to think too much.”

The first part of that assertion is because of this: “Starting at 19 when I felt [I had] to learn guitar I decided music was what I wanted out of life and to progress in this field. Now at 43 I have progressed to piano and as a singer/songwriter.”

There’s nothing like taking your time, I guess because – a year younger than your humble scribe – he’s finally after 24 years, putting out his debut EP.

Which, essentially is where the second part of my opening bit came from. I have never met Simon Fielder, but I feel a kind of kinship, because the words of “2AM, New York Diner” are surely autobiographical. The type of thing that only someone who worries about everything and obsesses over the smallest detail, would get: “I am going to the place where there is no fear….its 2am in this diner, I am not alone”.

Those are evocative words, no doubt, but the music sort of creeps up on you. English Elliot Smith? Maybe (Fielder is from Surrey, originally from London) but with a kind of pop twist, it is a light diversion, from the lyrics – and the strings are a classy touch.

“Caged Bird” is a more acoustic strum, there’s a touch of Noel Gallagher to me about the way he plays, “these obstructions, they won’t let me be” he sings here, and what they are – I am going to guess – is mental ones, but only because I know the form – but there is something widescreen about this, many of these type of acts go for a claustrophobic, bedroom, Springsteen “Nebraska” era feel, not here. It’s noticeable that it rises and floats almost.

None of this, really, was what I expected.

Because what I’d heard of Uncle Greedy first was “Midnight Train” and that sounds like nothing else here. Rather with its lead guitar and loops, it wouldn’t be out of place on the recent experimental Brendan Benson record.

It sticks out, because it is so different, “My Reflection” is more like other vibes “lets take it back to a time when it was fine” he offers, rather forlornly here, like he doesn’t even believe she’ll have him back himself.

“The Ghost Remains” – it might even be about the same girl – makes good on his piano suggestion, and the words are like reading his diaries. It is another interesting record on a 5-tracker full of them. And here, with the haunting harmonies, it is not afraid to go to places you don’t think it will.

The sort of thing Uncut would have been all over in 2000 or so, and the sort of thing I was buying then when whatever girl I was having an unrequited love affair at the time had gone out with someone else. Ok, there was only one, there have been others since. Still, I am over it now, right….?

It is telling that my mind went back there, though. Maybe it was supposed to, maybe that’s just the skill of the songs here? Or maybe Uncle Greedy and me have something in common?

Whichever it is, though, “Journey To Mile 39” is a classy opening statement, and there’s hints of more to come. Hopefully it doesn’t take 24 years for the follow up.