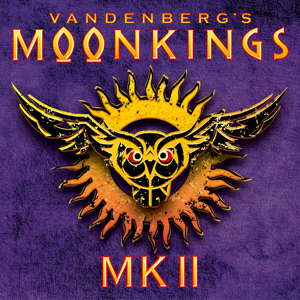 Vandenberg’s Moonkings, it is fair to say, surprised everybody back in 2014.

Not least the fact that Adrian Vandenberg had come back to music at all, after spending a good few years out of the limelight and committing to his painting.

Then there was the fact that the album was really good and the band – make no mistake this is absolutely a band – sounded so accomplished. All of which is fine, but does present its own set of problems. The second album (and really, there simply had to be a second one) now comes with a weight of expectation that the first did not.

But one listen to “Tightrope”, the opening song on the album simply titled “MK II”, should cheerfully put all that to bed. Vandenberg’s Moonkings are back and they sound just right.

It slinks in, and yes, it sounds a bit like Whitesnake, but it struts, it preens and it benefits from the wonderful rhythm section of  Sem Christoffel and drummer Mart Nijen Es (Vandenberg has called them the best he’s ever worked with and it’s easy to see why). As much as the guitarist is a wonderful player, it is those two that drive the record forward.

The chorus of the song “gotta get going and don’t look back” might just represent a metaphor for the new band, because certainly this has a lot to offer in terms of modern, yet classic, rock.

“Reputation” drips with lust and has an air of Inglorious about it, while “Angel In Black” starts off as a bluesy thing and absolutely bursts into life on the back of a slammer of a chorus, as Jan Holving on vocals finds his best hip-shaking form. “The Fire”, which follows, sees him channel some inner Robert Plant, as the Led Zep stylings mix with a rare form of confidence as the band hits top gear.

“Walk Away” is a more acoustic based affair, but shows its ambition with some gorgeous strings, while the sassy “All Or Nothing” shows Vandenberg’s outright dexterity as a player, but his gift is that there is nothing cold about this, “MK II” is a warm, welcoming collection.

12 songs is a lot for a modern album, but this is evidently a band with plenty to say. “What Doesn’t Kill You” has a touch of Bad Company about it, while “Ready For The Taking” explores the blues on the back of a massive hook.

The use of keyboards in “New Day” add depth to the unashamed 80’s style groove. “Hard Way” has a sense of defiance about it, and you do wonder if the lyrics – “keep on running cos I can’t stand still” amongst others –  refer to Vandenberg himself.

Fantastic drums add urgency to “Love Runs Out” and the last song “If You Can’t Handle The Heat” settles into the sort of sonics that Thunder might manage.

It is the very last sound on the album that is interesting, though. Just the guitar of Adrian Vandenberg on its own. This is his band, it seems to say, and he is very much at centre stage. He didn’t need to make his mark again, but on “MK II”, his Moonkings have established that they are one of the finest hard rock bands there is.