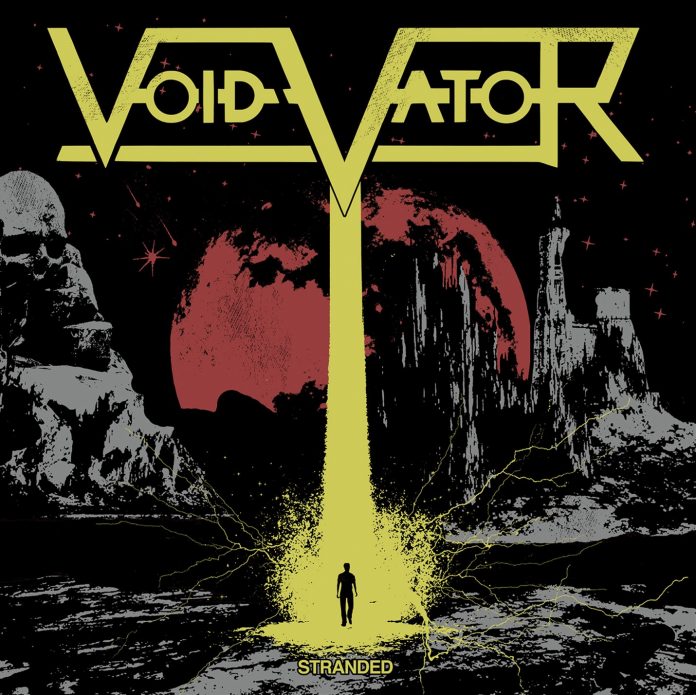 The first thing you notice about Void Vator is the urgency. “Put Away Wet” ,  the opener,  is one of those things that seems like its bursting to make a point.

Whatever that point is, the riffing of Lucas Kanopa (who also sings) and Erik Kluiber is interesting, because for all that their biography talks about “thrash”, the “new wave of American Heavy Metal” and “the big 4” then – while there are elements of that – to me really, it sounds like it isn’t moshing to anyone else’s tune.

Take the opener for example. Yes, it is desperate to get in the pit and has both the ebullience of a three year old in a sandpit and the desire for trouble of a naval officer on leave, it does something quite different. The middle breakdown bit is pure (to my ears anyway) AIC. It is a mighty opener.

At this point, I should probably say that “Stranded” was originally released as a digital only thing earlier in the year, and now the LA based quartet have put it out properly with the aid of Ripple Music and added a couple of bonus tracks.

And the thing sounds ace, too in its brans new format. Bill Metoyer (Slayer, Body Count) twiddles the knobs here and the likes of “Toxic Waste” really pack a punch. That one is typical, though, because like the opener although it knows its way around a metal riff, it doesn’t half sound like early Nirvana.

There’s a bit of a punk thing going through this from the start, and “Nothing To Lose” has a touch of The Hellacopters “Supershitty to the Max” era about it too.

The reason for all these names? Well, to make the point, really, that if you like metal, if you like rock n roll, and hell, if you like good music that is well played, then Void Vator are here for you.

Because even at the end of “…Lose” they morph into some mutant offspring of Thin Lizzy, and as if to emphasise the broad colours here, “Inside Out” has the same gift for melody and modern crunch as Dinosaur Pile-up, say.

Every one of these eight is superb in its own way, it really is, but a special mention for “Everything Suxs” which is short, to the point and snotty as can be. Sounding like a temper tantrum as over two and a half minutes Kanopa just gets angrier and angrier until he’s screaming by the end. Screaming into the void, maybe?

Whatever, German Moura’s drumming takes centre stage on “Come To Hand” and together with bassist Sam Harman, he propels it to some darkly interesting areas. The title track imagines some hitherto unheard jam session between Metallica and Stone Temple Pilots, and it’s as good – and downright weird – as that sounds.

The overriding feeling on “Stranded” as a whole and not just last track “Monster” is all these disparate sounds should a) not work quite so well and b) sound as cohesive as they do. Indeed, “Monster” is a case in point, given that adds a real Maiden gallop to things and then goes all downtuned and haunting in the middle.

Earlier in the year Bokassa did something similar, and like that, “Stranded” is a fresh, original take on a style that you all know. Void Vator are a band right from the top draw.