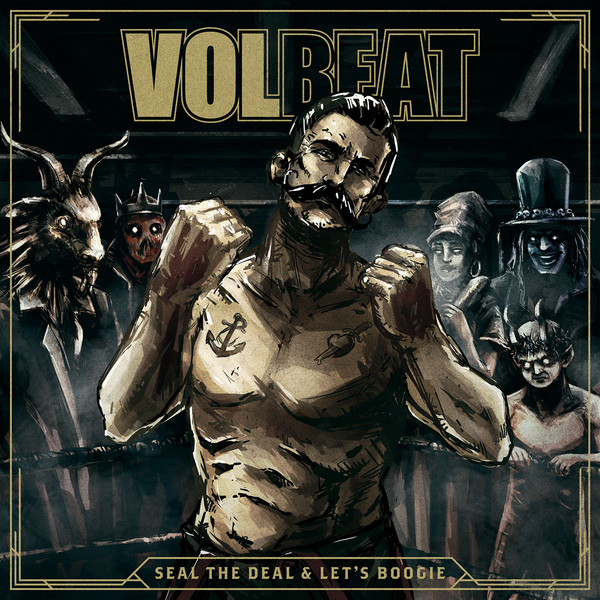 Remember when rock n roll was fun? Remember when it was simple and you knew what you were getting? A time before the internet, message boards, and when the only arbiters of what was “cool” and what “sucked” were two cartoon characters on TV?

Yeah? Me too, and thank goodness so do Volbeat.

There was a time when Denmark’s finest were best known in this country for providing the walk on music for Mikkel Kessler, the Danish World Champion boxer who fought Carl Froch a couple of times, although recently they have started to get their just desserts here too, to put them on a similar footing to which they enjoy in continental Europe, where they are serious stars.

If some of that was undoubtedly because the fact they were able to nab Rob Caggiano from Anthrax, then still more of the catapulting towards arenas in the UK was surely down to the fact that if you are as good as Volbeat have been for years then people generally take notice.

“Seal The Deal And Lets’ Boogie” is their sixth album, it might be their best too, although only time will judge that. The clue is in the title, its just a rock n roll record, with no plans to be anything other than that – and why should it when it does the job so well?

“The Devils Bleeding Crown” provides a chugging opener, and indeed that chug permeates much of the record, “Let It Burn” provides nice line in in shimmering acoustics in its chorus and “Black Rose” is simply one of the catchiest songs you are going to hear – and the thought that Volbeat always fancied being the type of slick backed rockers of the 1950s which is never far away, is right to the fore in the doo-wopping hook.

A little like The Wildhearts at their peak, Volbeat seem to be one of those bands that can write memorable songs with instinct, the glorious line in “Rebound” of “Did you have to give your boyfriend all my letters? I didn’t know he was six foot eight” in many ways seems to sum up the cheeky, Devil May Care attitude that permeates attitude here, while “Mary Jane Kelly” is put simply magnificent. It is however the sheer glee with which they deliver the nominal title track here that makes “Seal The Deal” perhaps the jewel in the crown that sparkles at the best of times.

A lengthy record – as most Volbeat collections are – it heads for home with a wonderful mid-paced rocker “You Will Know” which hides the lyrics about “the darkness in my soul” behind a summery sheen, while the closing track “The Bliss” heads off looking for the nearest rockabilly club, but does so behind a thumping a thumping hook in the way that only this band can.

Ultimately, like the intro said, there’s no point in overcomplicating things, so its as simple as this: any album with a cover of Georgia Satellites’ “Battleship Chains” on it is never going to suck. This one is no exception. “Seal The Deal And Let’s Boogie” is brilliant.