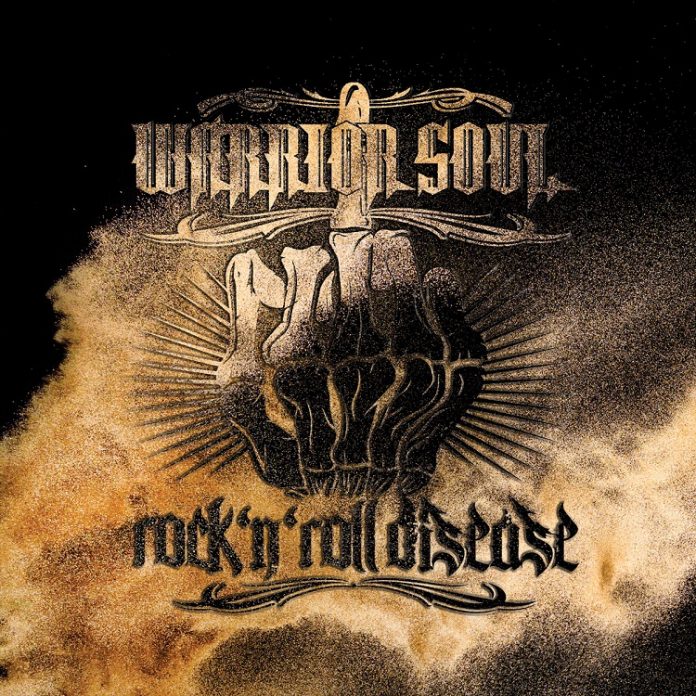 In late November 2017, Kory Clarke stuck out the first Warrior Soul record in years. “Back On The Lash” was ace too. Snotty, trashy fun, it rather cemented the oft-quoted opinion that Clarke was one of the greatest rock stars of all time.

18 months later Warrior Soul – a slightly revamped version – are back and they are back with this as their mission statement: “We are going for the same feel as ‘Lash’ but honing it in more and picking it up a bit. ‘Back On The Lash’ was raw, fun and loose, this is too, but we are pushing it all over the top”, said Clarke.

And you’d best believe he means it.

“Rock N Roll Disease” lives for excess. The needle is in the red for the entirety of its just over half an hour and eight songs.

“Up The Dose” is more than the first track here, it is the mantra by which this does its business. The man that once sang that “Love is a drug” has now decided that rock n roll (or just drugs, to be fair) is. “Please refill my opiates,” he sneers here (and everything either sneers or sounds like its gargling glass) “give me generic, or corporate.” He’s neither. He never was. Clarke has always been his own man, and you’d best stay out of his way.

The title track is three minutes of filth and fury. Sleazy as you like, “I need a nurse to vaccinate” seems more than something on the bucket list, it comes on like a requirement in truth.

In the context of this record then “Off My Face” probably doesn’t need any discussion, nonetheless, the opening line “get the cocaine, I am ready to play, find me some speed and some MDMA” still comes as a bit of a shock. The overall feel of the track isn’t far from a Chuck Berry style boogie, but its one played by the Sex Pistols, if it is.

“Melt Down” possesses a thunderous bassline, one that suggests a Hells Angels chapter are riding through. It deals with the recovery post-tour, but does so in a way that knows the party doesn’t end, while “Rock On” is blues of the dirtiest kind, it also casts an eye over the modern world and offers this warning: “you’d better wake up to the warning signs of the far right wing regimes….”

“War Ride Children” is perhaps the best thing that “…. Disease” has to offer. Dialling down the partying a little, (although it does contain the line “like Hitler on E……”) it scratches below the surface of Hollywood and doesn’t like what it finds. What “Going Mental” has found, though, is some AC/DC records, which it merrily gives a bit of a glam punk makeover, but its hook is one you won’t resist.

Everything ends, as do many club nights, with the afterparty. “After The Show” is unapologetic about its debauchery, unrepentant about the trouble it has caused and almost dares you to take it to task.

“Rock N Roll Disease” is the sound of Clarke doing what he loves to do. It’s almost as though he’s decided that no one makes records that celebrate hedonism anymore so he might as well. The popularity of the Motley Crue film proves there’s a market for this kind of vicarious escapism.

Approach with care, and be warned: the hangover here is going to be vicious.