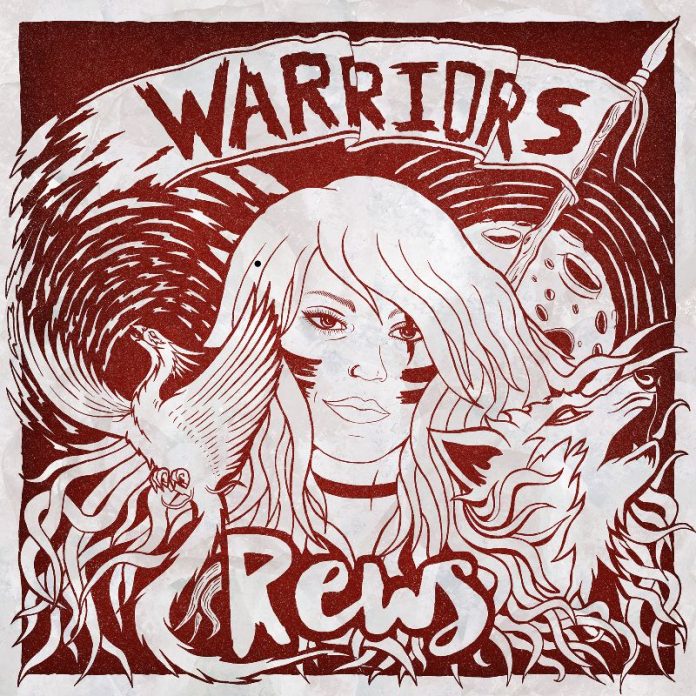 Yesterday, Beans On Toast released a single called “Save The Music” and at the same time I got an email from the Resort World Arena (or whatever the NEC is called these days) stating the music industry was on Red Alert.

I guess every sector is, right now, as we all try to find a way back to normality, but somehow the crisis affecting the music industry seems even more sharply in focus when listening to “Warriors.”

It’s Rews’ second record and its enormous. Both in sound, and also in terms of its leap forward from the debut.

What seems a lifetime ago but was actually only December 1st, I’d gone to The Academy in Birmingham to see The Darkness. I like Justin and the boys, always have, and we had a great time. The opening act that night, caught the eye though.

I’d written this in my review that night: “Part way through the set, impressive singer/guitarist Shauna Tohill – who seems very much the leader of this pack – asks the kind of question bands always do: “Who’s heard of Rews before?” She seems genuinely shocked at the loudness of the response. She – and the rest of the band – are probably going to have to get used to the increasing adulation.”

What sticks in the mind though, was the next day I got a lovely tweet from Shauna, and she excitedly asked me if I was going to be able to see them in Birmingham the following spring. Those gigs – like so much else – never happened, and that feels even more of a shame now as “Birdsong” kicks this record off.

Because it – and everything else here – sounds like its ready for a real breakthrough. And they deserve to be played to people in rooms that would get bigger.

What Rews do is simple. They build to massive hooks. The chorus is king here, a little bit like “Polythene” era Feeder, they are surprisingly heavy in places, not least on stuff like “Razorblade”, but its always accessible. There is, though, an undeniable stomp.

And they are clever. The use of harmony on “Heart Is On Fire” is unlike anything else. There is a crossover potential here, these songs could really connect.

“Monsters” – which they played that night with The Darkness – has a more punk outlook, and if there’s been a feeling throughout that this was a band that might just eventually shake some large rooms, then that’s made even more clear by the almost title track “We Are Warriors”, which rumbles along like Royal Blood.

To be fair, once I’d made the Royal Blood comparison, it became apparent that they’d reminded me of the Brighton duo all along, but its clear too that Tohill is prepared to carry the weight of any of those expectations, by being particularly talented as well as the clear figurehead of the band.

Capable of sounding sweet as honey one minute, then delivering a swift boot to the balls the next – witness the almost post-punk tastes of “Play Dead” for your proof – they are also in possession of some brilliant songs too.

“Love Hate Song” is arguably the pick of them. Crackling with urgency, it is the sound of a band that will not be held back. “Bad Girl” likewise, chops and grooves. “Itch” takes the whole massive feel to the next level (is gigantic the next thing up?) and even the closing ballad “Habits” is more interesting than the usual. Sounding like something Nirvana did on the “Unplugged In New York” record, it shows that Rews don’t mess with your clichés. They are far savvier than that, thank you.

Rews stand on the brink, they really do. The sort of band that has a real defining festival performance in them. “Warriors” almost dares you to doubt them. And, you best believe, they are up for the battle.