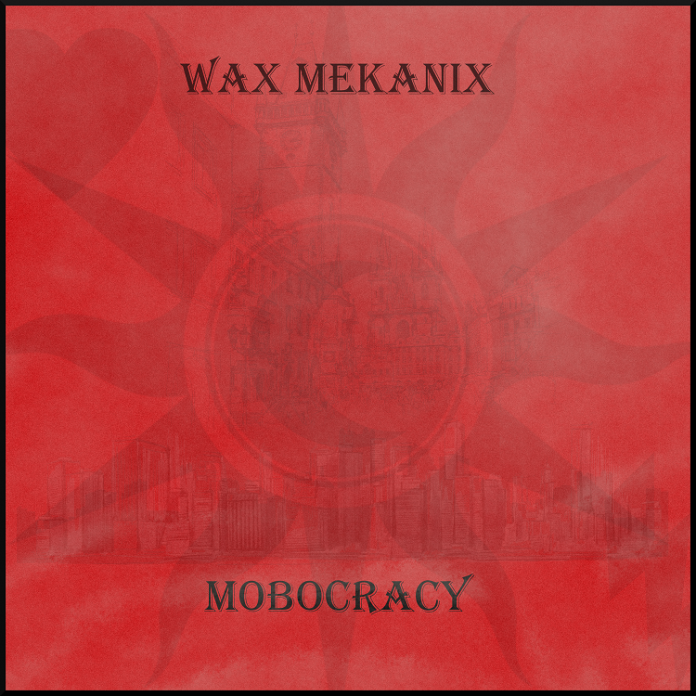 Waxim “Wax” Ulysses Mekanix is ace. Frankly, I am prepared to end the review there because try as I might, I can’t explain much more of “Mobocracy” beyond that.

Now, that’s not exactly a good way to review a record, I accept that, but man, I might well be reduced to doing a Homer Simpson here and writing “screw Flanders”.

So here’s what we know, because Wax told me this himself: “Mobocracy” is a focused collection of strident, aggressive, snarling, howling songs that draws on my decades of experience and influences.”

He also said: “History shows us that artists will not let this kind of tectonic shift in American life pass without comment. I’m just commenting now.”

Now, not to let too much daylight in upon magic, but I’ve had this album for months, it was originally meant to come out in October and it got put back. I’ve listened to it way more than I listen to record’s I review. Two reasons: 1) There’s a lot going on. 2) I really like it.

Oh and the other thing we know is this: Brandon and Chris of the mighty Crobot are amongst the guests here. So yeah, bonus points.

It would be tempting to take a listen to the first line: “I don’t wanna live forever” of “All-freaks” and imagine that it was nihilistic, no light at the end of the tunnel. And then it would be equally tempting to imagine that this opening song was an insight into the album as a whole, given that it sounds somewhere between The Cardiacs and Devin Townsend. It isn’t. Rather “Mobocracy” isn’t fussed what you think it is or isn’t, its just off doing its own thing.

It does offer “are you red or are you blue”, as a direct link to the politics of the US, but while you are contemplating that it is – in a rather primal, kind of blues way – asking you to “take back all your sins, face your god and begin again”. “Ghostland”, apart from anything else, grooves. Massively.

“Mad World” (not a Tears for Fears cover, have,  urrrmmm no fear), evokes Arthur Brown, before having a Maiden gallop, and seeing Wax – who has a superb “metal” voice – do something close to Alice Cooper. See what I mean about everything you know being wrong? Just know that this is one of the best songs you haven’t heard yet – and the solo is a proper freak out.

“Blood In My Eye” thunders. Questioning everything: “are you a menace or a mentor?” it asks, and you do ponder whether this is the record as a whole? Is it madness or genius? And that’s a fine line.

Then there’s “Victorious”. Proper euro power metal, fists in the air and everyone wearing searching for Odin, and just in case you thought what was missing was some psychedelic, shimmering acoustics – but with touches of U2 soundscapes – then “Black” has you covered. “Temptation baits her snare” he muses, and that type of poetry is what this is all about.

At the end of the day, you’ll listen to this and have your own ideas. It’s that type of record. Just make sure you do listen to it, because, Mob rules, you might say. And, urmm, screw Flanders.