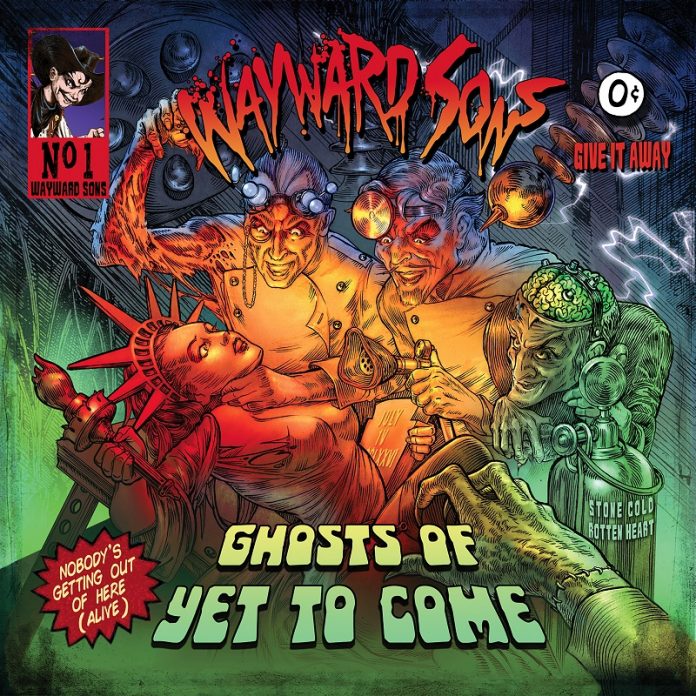 Carry on my Wayward Sons

When in 1989 Toby Jepson sang these words on the Little Angels debut full length LP: “ Johnny never cared ‘bout nobody/Cause no-one ever cared ‘bout John/He’s crawled his way this far through life/He’s the original wayward son” thousands of teenage boys knew he was singing about them and their lives. MV knows. MV was one of them.

Now in 2017, there will be thousands of blokes in their early to mid-40s who hear “Small Talk”, a track towards the end of Wayward Sons’ debut album, and get to this verse: “I was born into Thatcher’s disaster/cruel and selfish, like those words don’t matter/I don’t understand why that they praise it/cos it really was crap in the 80s” and will be yelling at whatever device they listen to music on and shout: “yes! Preach on, brother!”

The clue to “The Ghosts Of Yet To Come” is the name of the band. It might, of course, be just a cool moniker. But it isn’t. It represents so much more. For Jepson to name his new band after the breakthrough hit that his first had, well, it just seems like a statement. It seems like this is Jepson going back to full on rock n roll for the first time in a while.

The ten songs it contains prove that beyond all doubt.

The Wayward Sons contains some seasoned vets. Drummer Phil Martini was in the vastly underrated Tokyo Dragons, The Quireboys and The Union, bass man Nic Wastell was in Chrome Molly and keyboard player Dave Kemp is a long-standing cohort of Jepson’s. Arguably though it is Sam Wood, the relatively unknown guitarist in Treason Kings that steals the show. This is riff heavy classic hard rock and it is played superbly,

“….Come” swaggers in with a mighty groove as if it has a point to prove. There is an urgency in the lyrics of “Alive” too, as if everyone realises that it is now or never. “No one’s getting out of here alive” is the pay-off line, but it is too, perhaps the reason the album is so charged up.

“Until The End” has a mighty hook and shows the singer returning to something approaching his earlier vocal style, but also the lyrical theme of working-class struggle that he always loved. There is a touch of Thin Lizzy at their most metal “Cold Gin” end about the wonderful “Ghost”, and the dirty bass groove that ushers in “I Don’t Wanna Go” is that of confident, classy hard rock.

It is impossible not to listen to these songs and – rightly or wrongly – imagine the Little Angels in their pomp. “Give It Away” doesn’t even try to hide those links, while “Killing Time” is too busy with stadium filling intentions to care.

An album with plenty of sonic diversions, it doesn’t do ballads, but if it had one, “Crush” would be it. Radio friendly in the way Stereophonics were at their best, it does the mid-paced thing marvellously, while “Be Still” shows their flexibility with a kind of Northern English take on “Someday I’ll Be Saturday Night” (“I flashed the cash and got me some”) it is a brilliantly catchy – and yet real life- track.

That was always the thing about Toby Jepson. He was never a rock star that felt untouchable. He was a rock singer that was almost representing us on stage. As it finishes with the bluesy “Something’s Wrong”, “Ghosts Of Yet To Come” sees him right back doing that. The best thing Jepson has done in 20 years, it is one of the finest British hard rock albums of 2017.