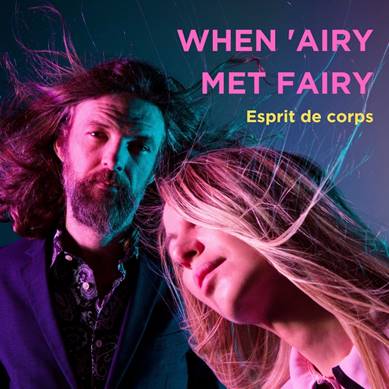 When ‘Airy Met Fairy are Iceland’s Thorunn Egilsdottir (vocals & piano) and Luxembourg’s Mike Koster (bass & moog). First forming in 2015, the pair were spotted by Icelandic musician Bardi Johannsson, who went on to produce their initial single, ‘Intoxicated’. Their debut album “Glow” was released in 2018.

They follow up this with a second album “Esprit De Corps” which translates to ‘Spirit of the Body’, having further developed the stripped back intimacy of their critically acclaimed debut.

The album opens with `That’s My Rock`n`roll` a really haunting exposed number with a piano leading the sleepy vocals with some interesting plucked guitar strings joining midway before a sound like a music box being opened and some close vocal harmonies close out this piece written about yearning and unrequited love. A cover of Rufus Wainwright’s `Going To A Town` follows which was written as a kind of protest against what was happening during Bush administration. The version offered is remarkably close to the original and it`s a song that is almost made for Thorunn`s aching vocals.

`Home` is a wonderfully atmospheric ode to those we treasure. Again, with just a piano accompaniment and an occasional drum beat the vocals soar. There are some interesting claps along the way adding to the ambience on `Another Year ` which I felt was a charming trip hop vibe song, a kind of Nordic reply to Massive Attack.

`Down in The Slow Motion` is a little strange, quite churchlike in parts even ecclesiastical. It has some really interesting organ inflections, tapped drumsticks and a tambourine being shaken amongst the many varied sounds that added to the overall moody structure of this. A track that chronicles biting loneliness and alienation follows with `On Your Own Again`. It`s a delightful cut with evocative strings all through and a real hypnotic beat throughout.

`It was Love` is another trippy slice of pleasure that regales the desire for and inability to obtain love.

It`s quite simple in delivery but wonderfully effective and quite heart breaking. There`s a similar sentiment on `I` with again a piano the dominant instrument and some quite random sounds along the way giving an impression of remoteness, even the vocals seem to quiver above, adding to the sense of isolation.

`Blanket Of Sorrow` and `Once` are quite mournful and melancholic offerings. The former was written about lost love and with a sombre sounding piano and Thorunn`s heart-rending vocals, it gives the song a real aura of desolation. The latter has a similar attitude but is a little more upbeat with some wonderfully interwoven harmonies, memorable chiming keyboard splurges and a cello shared toward the end. `Under the Snow` is a truly mesmerising track, quite stark at times with just a piano and vocals relating what seems to be a tale of somebody hiding away bruised from a relationship, possibly hoping for their lover`s return. The clapping and melodic shouts add to the overall mystery of the piece.

`Inside Your Lungs Superstar` has a percussive chilled texture allowing a narration of criticism of society’s social media preoccupation. At times, the words are so distant they are almost inaccessible.

The album closes with `Under the Rainbow` and it`s probably the most offbeat come curious cut on this release. The lyrics left me perplexed but the vulnerability in Thorunn`s voice was a joy to behold. Weird but wonderful.

The duo have described their sound as minimalistic, heartfelt, dreamy and melancholic trip-hop. It would be hard to disagree with any of that and the whole album is based on gut feeling and intuition. Whatever felt right, was kept. They say you should never judge a book by the cover and having read the band`s name, I assumed they`d be some shaggy haired metalheads from Halifax, but this captivating electronic, Indie, melancholic, orchestral come pop outfit have an unnerving beauty about them. This release will need a few listens for you to undertake their musical journey but it`s an emotionally, intense experience at times but one well worth experiencing.