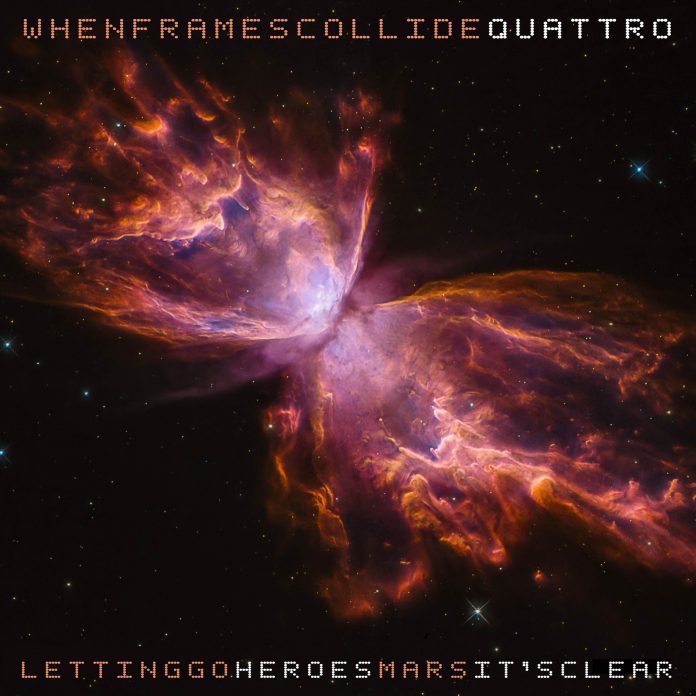 I don’t want to be one of those arseholes. The type that comes to work in a morning and says something like: “God I am so tired”, just so you go “why what did you do last night?” But we are where we are.

So I am going to have to start this review in a most odd way. Because I honestly don’t know whether “Quattro” is the debut record from When Frames Collide or their swansong.

See, it turns out, the band (who feature Andy from Aussie rock royalty, Horsehead) appeared last year, played some gigs in Melbourne, made these four songs and disappeared.

There is one thing that is abundantly clear in the mysteriousness, though. And it’s this: “Quattro” is superb.

It doesn’t sound like an Australian band, either. It doesn’t sound like it was made in the 21st century, come to that. Instead, “Letting Go” sounds like a UK pomp rocker from the 70s. Like Queen would be if they weren’t such a godawful nuisance, or ELO if they ditched the pop. This is just fun. It’s got a Devil May Care attitude and be damned with trends.

“Heroes” – and I don’t think I was blinded by the title – has a bit of a Bowie thing going on, and a feature of the four is the wonderful way that keyboards are used. Sparing, but bang on point.

“Mars” grooves like a glam rocker with a smile on its face. You’d call it arena ready, and it kind of is, if this was actually a band, which is the weirdness of this. Whatever, Jon Lord would be proud of this organ lick.

The last one “It’s Clear” changes the vibe altogether. A six minute blues and soul hybrid, which floats by brilliantly.

And if the only thing that is truly certain is that it was too good to be unreleased, then maybe in some future poll, of the best thing that a band have ever released posthumously, as it were, this should figure near the top. The literal embodiment of the idea that it’s better to burn out than fade away. Maybe it’s the essence of rock n roll.