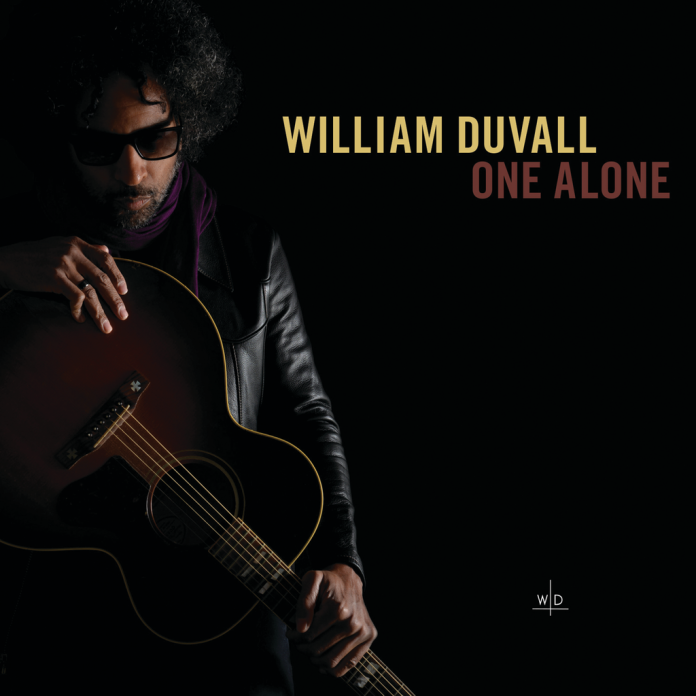 William Duvall on the front cover of his first ever solo record, is there, in leather jacket, dark shades, looking every inch the mean and moody rock star.

But then you notice the acoustic guitar, and that is integral to “One Alone”. And the very title of the record gives it away too. This is a very different Duvall to the one you see as frontman in Alice In Chains, a world away from the teenager in Neon Christ.

This is literally just William Duvall. On his own. With his guitar. And his demons.

And it is astonishing.

“I felt the need to peel everything back. This album is strictly one voice, one guitar. It reveals the very core of who I am as a singer, guitarist, and songwriter.” Is how he said it himself. The results are so cathartic, though, that it seems like he is releasing his demons.

Only he knows how much of this is real, personal, but in a way that doesn’t matter, because sometimes innermost thoughts are not real and tangible.

Whatever, when he sings “it’s a wicked sorrow, that makes a man do the things I’ve done,” as he does on the opener “Till The Light Guides Me Home” in many ways it sets the tone for what follows.

It is interesting to that the lyrics are just as dark as those on the last couple of AIC records, and the way he delivers them isn’t too far removed either, for example “The Veil Of All My Fears” is unmistakably him, but the feel is so much more raw, claustrophobic if you like.

On “The 3 Wishes” he talks about “sweating out my sin”, while on “Strung Out On A Dream” he exemplifies the confusion of it all, thus: “lover I just can’t make sense of this….” He sings, as if to himself, but it is worth saying, too, that these are fabulous songs. Genuinely. Well-constructed, well-paced and each one offering something different.

And, my goodness, what a voice Duvall has too. I remarked on it when I saw AIC earlier in the year, but on the mighty “White Hot” here, you just go “wow!” People go on about Myles Kennedy from Alter Bridge, but honestly I’d put Duvall up there as the absolute best.

There is something of a Led Zep feel about “Still Got A Hold On My Heart” and if you think the others have – to borrow a song title from Stiff Little Fingers – taken in some of “My Dark Places” then gracious, “Smoke And Mirrors” is resolutely bleak. “Raping my memory” is one of the starkest lines you can imagine, isn’t it? And he sings it here.

“So Cruel” has a blues tinge or two. But there is no peace here, no contentment, just crucifixion on a “cross called love”, although it is balanced by the gentler “Chains Around My Heart”, and the pop nature of “Keep Driving Me Away” is proof really that this album could have gone in any direction it had wanted to.

“No Need To Wonder”, and there is no better way to put this really, takes things into a Jeff Buckley sort of area, and is the perfect closer here.

Make no mistake about this. “One Alone” is one of the great acoustic records. About 25 years ago, I heard “Nebraska” by Bruce Springsteen, and it opened me to the thought that music could be stripped back and emotional. All these years later, it would be wonderful to think that “One Alone” could do that for someone else.

This one is right out of the top drawer.