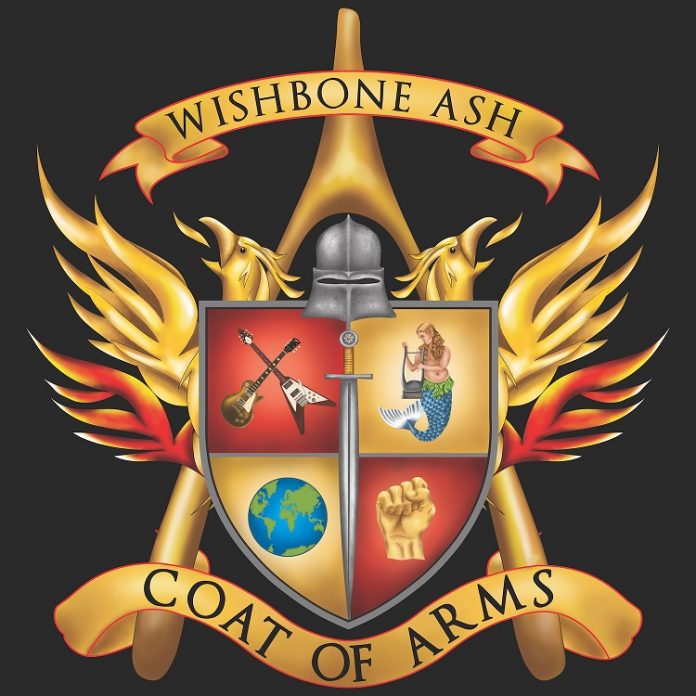 Whichever way you look at it, being in a band for 50 years is a hell of an achievement. Wishbone Ash are bringing up that anniversary with a new record, their first for six years – which perhaps puts some extra pressure on “Coat Of Arms”.

Now, to deal with the elephant in the room. There’s only one of the “classic” line up. That shouldn’t be a shock since any reunion of them looks particularly unlikely, but whilst “…Arms” is no “Argus” (and let’s be honest too and say that was never going to be recreated) it does herald a return to the more “classic” Ash sound, if you will.

Andy Powell, the only “original” left here, has credited the new addition with reinvigorating them this way. Mark Abrahams, he says has  “brought two important factors to the band: youthfulness and energy, a little like when somebody injects you with a strong stimulant”.

A key factor in this is Abrahams is a genuine fan. Learning to play guitar by listening to the group as a boy, and his work here is fabulous.

The bluesy lick, at the end of “We Stand As One”, for example, comes almost out of nowhere, and the record as a whole sees a return to the twin guitar sound that so informed their work previously.

Another crucial point about “….Arms” is that it stays relevant by having modern themes. “….One” deals with climate change, and it all helps add to the modernity of it. This is – both literally and figurately – not a 70s rehash.

The title track, along with the opener, is arguably the standout. Nearly eight minutes and always interesting, it is proof that when the album gets it right it is a superb thing.

It is also a diverse work. “Empty Man” has a kind of Americana twang, and whoever is the subject probably isn’t top of anyone’s Christmas card list: “your country club life looks so shallow and grim….ignoring old friends and turning your back” is a neatly acerbic put-down.

The lyrics are interesting throughout, actually. Largely a Powell family affair, son Aynsley and wife Pauline are often credited here, and there is a warm, floating feel to “Floreana” for example, the problem is that that is just one of a few that seem to pass by.

It’s not that “Drive” and the likes are bad songs, its just, they are just a touch throwaway. The slow building, “It’s Only You I See” is much better – albeit it seems to be ready to turn into “Children Of The Revolution” halfway through. Abrahams’ influence is all over it too, and he sees at as a homage to the WA classic “You Rescue Me”. As a centrepiece to the album, it will do just fine.

“Too Cool For AC” is another from the “pleasant rather than essential” file, and given that they have been doing this for half a century, they are probably entitled to the self-congratulatory “Back In The Day” (“50 years and counting, we’re still going strong, back out on the road again, that’s where we belong.) and that feel is all throughout the album. The suggestion that Wishbone Ash (this version I mean) just love it and love keeping the flame burning.

“Consider Me Known” seems to waft in on the type of folk that you always associate the band with, and “Where The Love Is Shared” balances that out with something of a groover, but it’s the last one “Personal Halloween” that rather underlines the feel that on “Coat Of Arms”, anything goes. Blues led, but with a horn section that makes you imagine some dive in New Orleans.

It also sounds thoroughly relaxed and happy with its lot. That sums the whole record up. Sometimes it’s a little too chilled out, but there’s enough here across the hour to suggest there’s a lot of life left in the band yet.