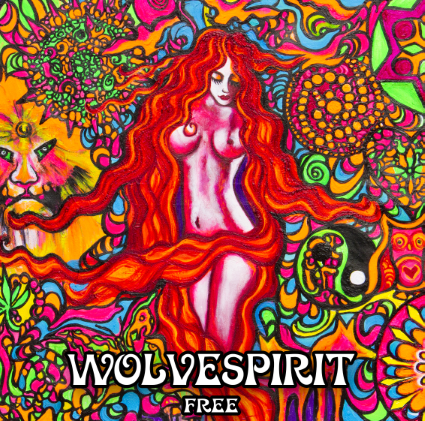 Damian gets all psychedelic with these Germans

WolveSpirit are a psychedelic rock band hailing from an Artists commune in Wurzburg, Germany

Fire is the bands third album following on from 2011`s Spirit Metal and 2013`s Dreamcatcher.

“I Am Free” kicks us off and we are offered an elevating piece of seventies rock with some wonderful Hammond organ throughout with Debbie’s wonderfully rich vocals leading us a merry dance.

A more laid back tune in the form of “Shining” follows with the vocal duties being shared with guest song smith Mark Slaughter. The voices really compliment each other and we are also gifted some cracking guitar riffs.

A more dirty sleazy bluesy number follows with “Into The Mirror” before we get a cracking track “Angelman” a real progressive rock trip out with that wonderful swirling organ again. A number that, I’m sure Deep Purple would be proud to call their own.

“Moonlight” starts with some hypnotic Native American chanting before it turns into a more sing a long number. The lyrics of “Moonlight shines on me, up in the sky, looks like heaven” will have you humming them long after this track is over.

We get a change of direction with the wonderful acoustic number “My Best Friend” before heading back to the thumping, rocking “Wild Woman”

A real anthemic love song follows with “This is Love”. We get some spoken prose from Mark Slaughter before some wonderful guitar licks and Debbie’s crying almost pleading vocals to round it off.

“Timelord” is a more throw away trippy interlude, which precedes the bluesy grungier heavier psyche that is “Spirit in my Soul.

The penultimate track “Sometimes” is a slow dark and at time haunting piece. A quite unnerving almost unrequited love ballad of sorts.

The final song “Mercy” is a real uplifting offering to close out the album. The band really get to strut their stuff. Richard, Oliver, Andreas and Daniel all get to show what superb musicians they are, while Debbie’s varied vocals are layered on top.

This is a cracking album from this group who are almost a band out of their own timesphere.

An almost retro composition harping back to the glorious psychedelic sixties and progressive rock times of the seventies. In Debby Craft the band have an outstanding vocalist who at times reminds me of Jefferson Airplane’s Grace Slick and the late, great Janis Joplin. She is complimented by a marvellous set of musicians. A real match made in heaven.

I would love to witness this troupe sharing these songs in a live setting.In the meantime though I would suggest that we all imbibe of the “WolveSpirit” that’s on offer here…