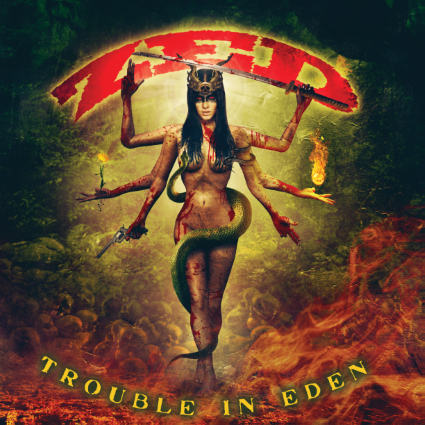 Realise that you and me/we are this world’s biggest enemy/ took over ocean, island, land and sea/and spread like all disease/we were hungry so we killed to eat/ drank the water/turned the trees to sheets/trading nature for cruel industry/and brought it all to its knees.

Whether you agree with those sentiments or not, there’s no denying it’s a powerful opening verse to a title track. It is with those words that Zed choose to usher in “Trouble In Eden.”

This alone should tell you that the San Francisco based quartet have weightier matters in mind than swigging from a bottle of Jack looking for Girls, Girls and Nothin’ But A Good Time, and thought pervades most of “….Eden”. Indeed “Blood Of The Fallen” – the song which follows the title track concerns itself with The Rapture – albeit it decides that there is no heaven and no hell – the anti-religion theme is one that has been explored previously on “Save You From Yourself” a little earlier on the record – taking a similar line to The Almighty’s seminal attack on evangelists “Jesus Loves You But I Don’t” that true faith and moral code comes nowhere other than from within.

All this, perhaps, isn’t the kind of stuff you’d expect on your average rock n roll record, but that neglects that the best of the people that use music to make a difference – whether its Billy Bragg, Steve Earle, Springsteen or Bob Dylan or whichever one you pick – have done so in an accessible and thoroughly entertaining way.

To that end, its worth pointing out that “Trouble In Eden” although Zed’s third album, is their first for Ripple Music and if you follow that label then you will know that pretty much they stick out is fuzzy, groovy and rifftastic (yeah I am aware this isn’t a word – but it should be).

That means that opener “Royale” comes with an opening refrain that is meant to shake the damn earth before it sets out saving it, it also guarantees that “The Only True Thing” is sort of what mid-period Corrosion Of Conformity would have sounded like if they had added a psychedelic flourish to “Wiseblood” – as well as bringing a frankly obscenely big chorus.

“Today Not Tomorrow” has echoes of a bluesy Orange Goblin as superb singer Peter Sattari lets out a full-throated roar that he just about restrains. “High Indeed” – as you might expect – offers a deliberate stoner overtone, but fair old soars in its hook, and rather than being about what you might think instead is another about the wanton destruction of the planet.

“So Low” adds a Led Zep-esque acoustic dynamic, “Across The Sea” is perhaps the heaviest thing here and an excuse for a freak-out, while closer “The Mountain” is appreciably the longest thing here and definitely as the most epic feel as it wanders and meanders wherever it wants to go.

That’s Zed and that’s “Trouble In Eden” a nutshell, because however familiar the music might be (and let’s be honest there’s plenty of bands making this type of racket right now) don’t try second guessing this lot, because they’ll plough their own furrow (probably using organic fertiliser).

It makes for a really interesting – and tasty –  harvest, mind you.