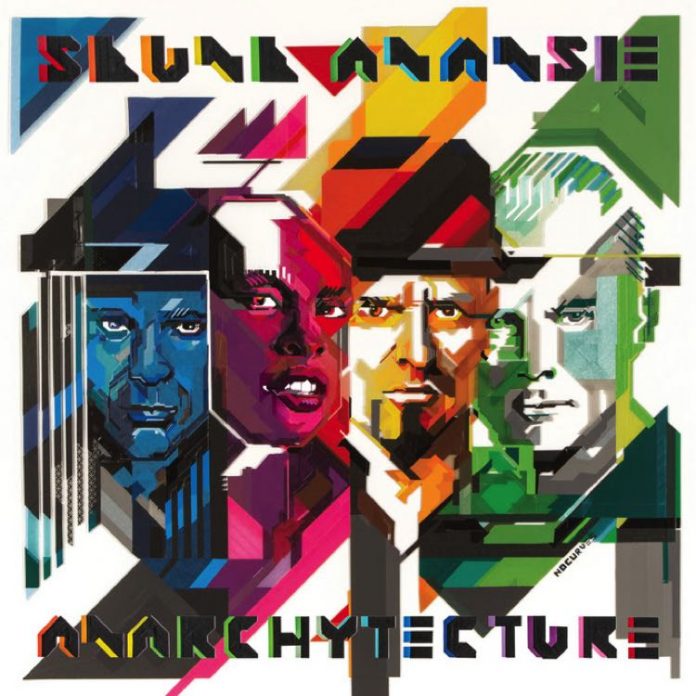 Skin and the boys are back after a hiatus. Damian is excited.

Four years on from the wonderful “Black Traffic” comes Skunk Anansie`s sixth studio album. “Anarchytecture”  A long time to be away and to most bands this could prove to be a real problem. But this is Skunk Anansie we are talking about!

Straight in is the crashing, bruising “Love Someone Else” about two different people that are so difficult to be with that they would make you want to consider another relationship. A real cracker of a song to kick of with, which highlight`s all aspects of Skin`s wonderful voice, challenging, questioning, pleasing and menacing.

“Victim” follows and is a much slower lament about being caught up in a one sided unrequited relationship.

Next up is “Beauty is Your Curse” with hooks very reminiscent of the late seventies punk era, hinting at bands such as X Ray Spex or the Pistols. A superb well paced tune.

“Death to the Lovers” is a song that really shows off Skin’s incredibly rich vocals. This is what Skunk Anansie really excels at, when they put their mind to it. They are adept at songs that are not quite a ballad but a real anthem – one where you can imagine an audience illuminating an arena, holding up their lighters and mobile phones.

“In The Back Room” builds up with layers of guitar, bass and drums with Skin teasing us over this grinding sexual beat. The engine room of guitarist Ace, bassist Cass and drummer Mark Richardson get to strut their stuff, A high energy edgy lament with lyrics teasing with what may be on offer in the back room. The bass line almost hypnotic at times.

“Bullets” is a punchy very menacing song, hinting at a presence that is unstoppable and will get you whatever you try to do.

This is followed by “That Sinking Feeling” an upbeat, funky number with a wonderfully catchy chorus that will have you chanting it long after you think you`ve forgotten about it.

“Without You” is a heartfelt lament for a lost love and trying to come to terms with the situation.

“Suckers! “ is a short instrumental interlude which Rage Against the Machine, Killing Joke or Gary Numan would be proud of.

“We Are The Flames” is a churning, in your face mantra, almost a flag waving get behind us and follow the cause anthem for the Skunk generation.

“I’ll Let You Down” brings the album to a close with a wonderfully structured song which is almost a hymn about a person’s lack of self esteem and inability not to disappoint.

A wonderful return that highlights all the rich and varied aspects of this band.

Probably the most underrated singer in this country backed by probably the tightest band around. What is there not to like. There is something for everyone here on this album.

It really feels like Skunk Anansie have never been away. Welcome Back.