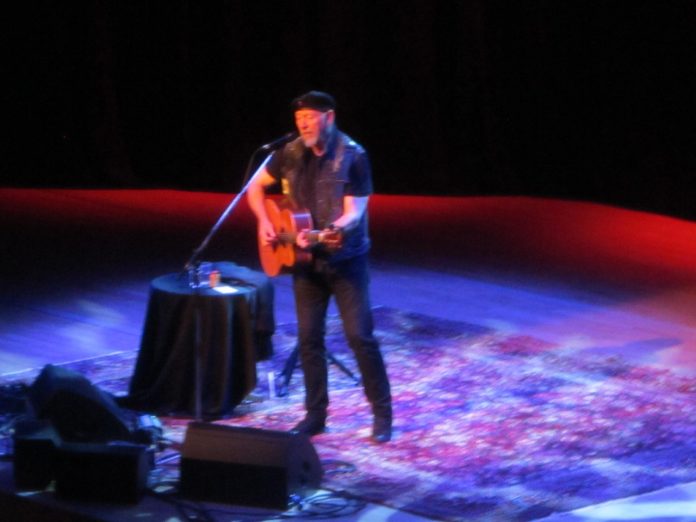 Damian spends a night with a legend

When I think of the mighty Pink Floyd, I always think of their superb guitarist and songwriter Roger Waters who left the band and enjoyed further critical achievement. So, I must admit I have the same feelings when I think about the wonderful folk innovators Fairport Convention and Richard Thompson, their terrific guitarist and songwriter, who left them and forged a successful career. Tonight, we get to enjoy the fruits of that labour in the wonderful setting of the Butterworth Hall in the Warwick Arts Centre complex.

I`m sure Richard Thompson needs no introduction but just for the sake of clarification he co-founded Fairport Convention as a teenager, has received lifetime achievement awards on both sides of the Atlantic, has won a prestigious Ivor Novello award, was honoured with an OBE and was named by Rolling Stone magazine as one of the top 20 guitarists of all time. Enough said!!

The show kicks off with “Gethsemane” a song that deals with the disillusionment and pressure that follows an idyllic childhood, an anti-war anthem of sorts. What RT has perfected is that art of writing heart-breaking love songs of sorts, first loves, past romances, unreciprocated relationships, whatever but with such thought provoking lyrics. He shares a few with “The Ghost Of You Walks”, “Valerie”, the rather cynical “Crocodile Tears” and the achingly beautiful “Beeswing”. I defy anybody not to have a tear in their eye listening to this.

We get a couple of less well-known tracks from the Acoustic Rarities album with “Push and Shove”, a song that RT felt sounded too much like the Who to release and “They Tore The Hippodrome Down”

Mr Thompson feels it`s time to play the hit song, a number that troubled the charts in 1974 reaching number 39 so the classic “I Want To See The Bright Lights Tonight” gets an airing.

It`s fifty years since the formation of Fairport Convention and after a brief confession about it being great to celebrate this milestone with the band, but after a few days of rehearsal he understands why he left, we get the moving “Who Knows Where The Time Goes” A song voted the most influential folk song ever by listeners of Radio 2, which the artist dedicates to the memory of writer and singer, the sadly missed Sandy Denny.

I have seen Richard Thompson numerous times, with a band and solo and it`s always a privilege to attend one of his shows. He is enchanting, humble, has a wonderful sense of humour and shares songs that are intelligent, sad, uplifting, inspiring but always thought provoking. Tonight, was no exception, he really is one of our National treasures.