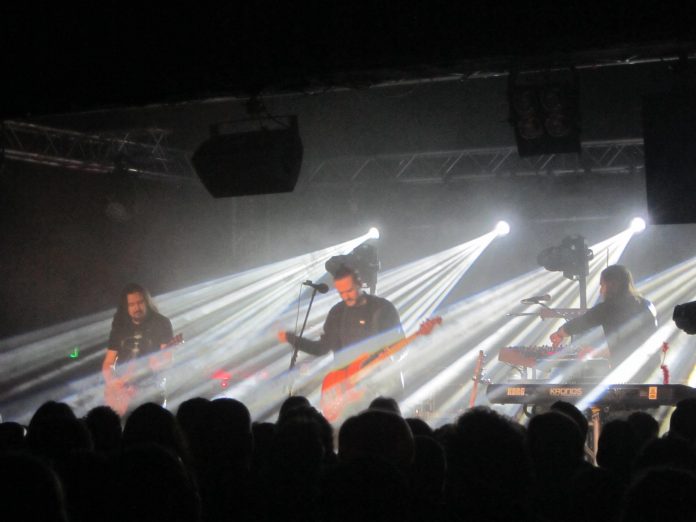 I have been extremely fortunate to travel to Poland many, many times over the last twenty years or so and three bands amongst numerous I’ve heard, have stayed with me on returning. Riverside, Myslovitz and Kult. I`ve also been lucky enough to catch Riverside a few times in a live situation but not since the tragic passing of their wonderful guitarist Piotr Grudziński, who died in February 2016. So, it was going to be a night of mixed emotions as the band arrive in my home city on this lengthy tour to promote last years release of their seventh studio album “Wasteland”

There`s almost a reverential polite applause as the lights go down and the band take to the stage and pick up their instruments, As expected, tonight`s show leans heavily on last year`s release and indeed three of the first four numbers come from this record. `Acid Rain` is quite a rocky track to open with, giving almost an impression of an apocalyptic world. A good choice as it has the faithful singing along with the whooh, whoohs towards the later part of the song. The dreamlike and wonderfully melodic `Vale Of Tears` follows and has the audience clapping along, then the heart breaking `Lament` which is indeed a lament or a passionate expression of grief or sorrow. I would defy anybody not to be moved by this song.

The guys were at a crossroads when their friend Piotr died, and they considered ending the group but chose to remain as a trio and bring in musicians when touring. The last release `Wasteland` seems a cathartic album with visions of a dystopian future for the planet and singer Mariusz Duda has said he was influenced by the apocalyptic Cormac McCarthy book The Road. The show continues with some older tracks and we get a couple off the debut album with the instrumental `Reality Dream` and `Out Of Myself` before sharing a shortened version of the cracking `Second Life Syndrome` and the introspective `Left Out` which gives Michał Łapa a chance to share his wonderful keyboard skills as the song almost becomes a musical jam.

One of the positive things I noticed tonight is how animated Mariusz is these days and he amusingly shares that he is happy to see at least seven people around twenty years of age in this audience, quite unusual for a prog rock show.  He becomes a little more serious as he refers to a divide which has affected his homeland before he and established touring guitarist Maciej Meller joins him to play an acoustic and moving version of `Guardian Angel` from the latest release. A song he stated that could have been written for these unsettling times in Poland. The home stretch sees a variety of tunes from their back catalogue with the hypnotic `Lost (Why Should I Be Frightened By A Hat) `, elaborate `Egoist Hedonist and `Loose Heart` in which we all got to scream “Raise me up don`t let me fall” towards the end of this song. The night closes with the title track of the last release `Wasteland`, an epic tale that covers all aspects of Riverside including blistering guitar inflections and Piotr Kozieradzki`s thumping drums. A song that wouldn’t appear out of place in a spaghetti western or sci fi film.

It`s not long before the fellas are cheered back to the stage and they offer up a couple more tunes. The brilliantly perturbing`02 Panic Room` gets an airing before Mariusz talks movingly about their lost friend and guitarist Piotr Grudziński and how he`ll always be with them before ending the night with a final cut from “Wasteland” with `River Down Below`. A piece that lyrically, almost has religious connotations. There are almost nods towards Pink Floyd`s `Comfortably Numb` a delightfully touching and emotional way to remember their friend and to close this stunning two hour set. This was a superb gig that gave the observer all they could wish for, a stunning light show, superb musicianship, wonderful songs old and new delivered by a maturing frontman who shared them with a voice that has such a haunting quality.

What more could you ask for. Riverside are really a prog come hard rock band for the next generation.