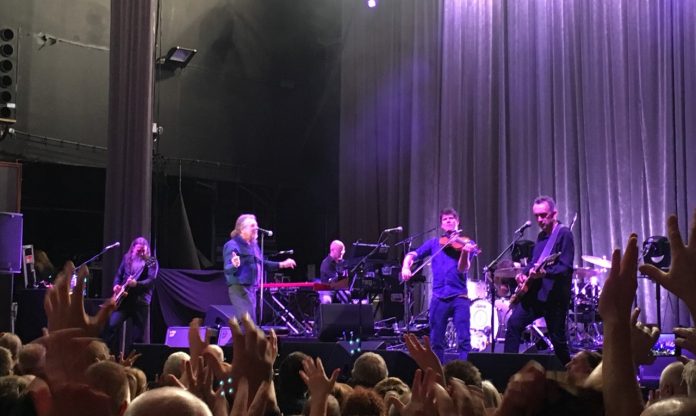 He’s usually at Molineux, but this time our Garry finds the legend across the road

The prodigal son returns is how this show could be billed but as Mr Plant spends so much time at the football stadium across the way it’s easier to say ‘Planty is in Wolverhampton again’.

Monday evening in support of the excellent ‘Carry Fire’ album and a fine evening’s entertainment they provided us with.

I really like the new album but always felt that the songs would really shine and grow when performed live….and blimey I wasn’t wrong!!!

Tracks such as ‘New World’, ‘The May Queen’, ‘Bones Of Saints’ & the title track seemed to sparkle in the packed venue as each track became a kind of mini jam session, you really can’t beat seeing quality musicians express themselves.

Mr Plant just looks like he is having an absolute blast with these guys on stage and a quick scan around the crowd showed a lot of very happy faces…..evenings like this are a real treat and need to be enjoyed and savoured.

There were a fair few Led Zep songs in the setlist albeit with different arrangements to suit the current style of the band…..here is the question I’ve asked myself after seeing Mr Plant a few times in the last few years…..would I miss the Zep tracks if they weren’t there?

Although many would argue against that point.

I really enjoy the current band Mr Plant has and love the feel of the performances, I look forward to seeing them again soon (hoping to be at the Birmingham show in December) as these are very special nights….and it’s great to back in a very special venue once again, nights like this at the Civic Hall are….to coin a phrase from my Black Country friends….Bostin!!!!