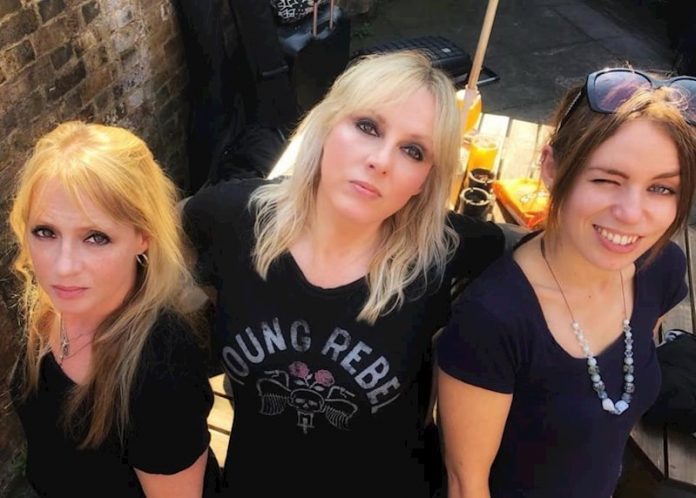 ROCK GODDESS release a vinyl version of their acclaimed latest album THIS TIME through Bite You To Death Records/Cargo on September 6th.
Pre-order here: https://cargorecordsdirect.co.uk/products/rock-goddess-this-time

Since reforming in 2014, ROCK GODDESS have taken their time to get it right, easing themselves back into the scene with UK and European festival slots plus a short tour as Special Guests to the mighty Saxon in 2018.  In between shows, the band have worked tirelessly on making sure the new album was a current take on the classic ROCK GODDESS sound.

“We always saw a new album as part of our evolution“, remarks vocalist/guitarist Jody Turner, “and we still have a lot to say. But the principle is still the same; make an album, go out and tour, and bring the music to the fans, hopefully gaining new fans along the way.”
Classic Rock writer Malcolm Dome said of the album  – which entered at Number 10 in the official UK Rock Charts in March: “Rock Goddess show on this album they still have dynamism and power, as well as the precious ability to write confident, high grade songs. They’re very much a world class band.”
Paul Davies of The Express newspaper said in his review that it was “a banging album of loud and pleasurable metal anthems.”

After cutting short their last run of dates in March when Jody was hospitalised mid-tour. ROCK GODDESS returned to the stage in July at the Rock n Blues festival
Rock n Blues review here: https://metalplanetmusic.com/2019/08/gig-review-rock-and-blues-custom-show-pentrich-derbyshire-25th-27th-july-2019-day-2-review/

Hitting the road at the end of this month, the band are fully fit and firing on all cylinders with a mission to showcase a lot of the new songs, as well as bring back some crowd favourites.
Of the last few months, Jody continues: “In all honesty, it’s been tough after the criminal demise of Pledge Music, which owed thousands of pounds to us and lots of other bands. Finally, the vinyl will be out but the Pledge debacle made this whole process much tougher. But onwards and upwards: Please come along to our shows. We are so looking forward to this tour!!”

Joining ROCK GODDESS on the September UK tour dates are Glasgow rockers HEAVY PETTIN’, who reformed in 2017 initially for a one-off performance at Winterstorm Festival in Troon, Scotland.

And, as HEAVY PETTIN’ frontman, Hamie, enthuses: “Rock Goddess and Heavy Pettin’ together!! It’s one helluva bill, in front of the best rock fans anywhere! It’s gonna be Epic!”
“We are especially excited to be touring with Heavy Pettin’,” states Jody, “this is going to be a night you do not want to miss.”