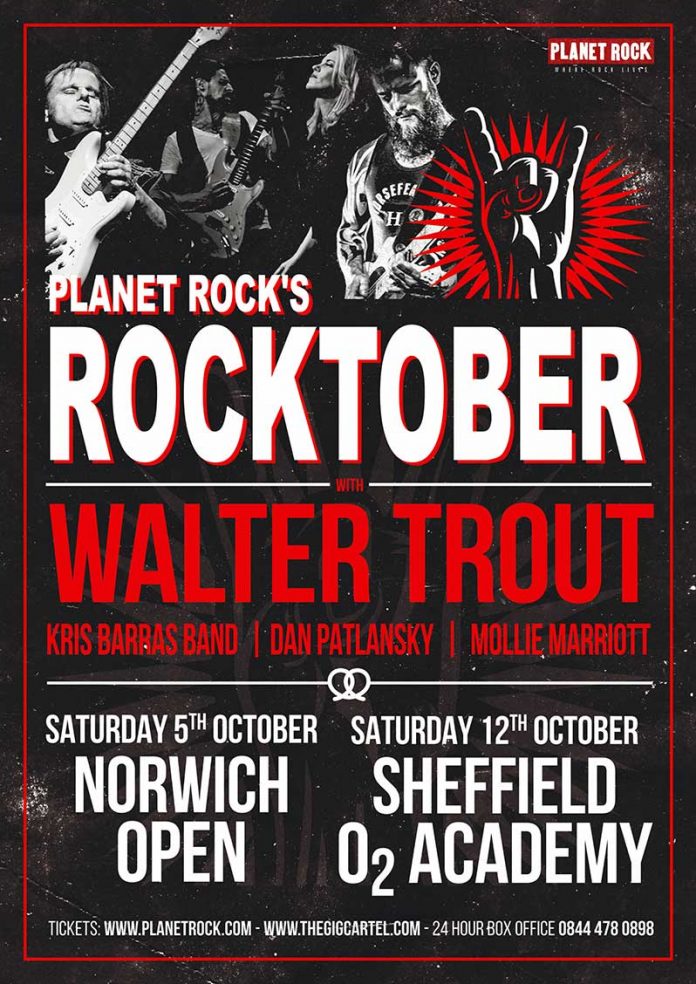 Says Walter Trout: “I am excited to play the UK Rocktober dates with such a great line-up of artists. This will be quite an event. I hope to see you there. Big thank you to Planet Rock for supporting this music so well for so many years.”

Walter Trout’s backstory is a page-turner you won’t want to put down. Five decades in the making; it is equal parts thriller, romance, suspense and horror. There are musical fireworks, critical acclaim and fists-aloft triumph, offset by wilderness years and brushes with the jaws of narcotic oblivion. There are feted early stints as gunslinger in bands from John Mayall’s Bluesbreakers to Canned Heat, and the solo career that’s still blazing a quarter-century later. The veteran bluesman has seen and done it all – plays earth shattering blues rock music.

Kris Barras is one of the UK’s most exciting Blues rock guitarist. The band’s Southern, Blues-Rock sound encompasses dirty riffs, husky vocals and screaming guitar solos. Inspired by his father at the early age of only Six years-old, Kris was already making an appearance on stage before turning Ten. He has since gone on to spend more than twenty years thrilling audiences throughout the globe playing live. Kris was voted in the Top 15 Blues Guitarists in the world by the readers of Music Radar/Total Guitar Magazine. In April 2018, it was announced that Kris would become the new frontman for USA super-group, Supersonic Blues Machine. The band feature’s legendary artists such as ZZ Top’s Billy Gibbons, Steve Lukather (Toto), Eric Gales, Warren Haynes (Gov’t Mule) and Walter Trout.

In only a little over a decade, Dan Patlansky has become one of the busiest and most respected blues artists to ever come out of South Africa. After his debut album which garnered Dan a reputation as a Blues-phenomenon, and his subsequent “Readers’ Choice” vote as “Best Blues Guitarist in Southern Africa”, Dan’s second album was released by EMI on the famed Blue Note label. Dan is one of the only South Africans to ever achieve “Blue Note” status and one of only six Fender endorsed guitarists in South Africa. Dan Patlansky, #1 Blues Rock Album 2016 by Blues Rock Review.

Having supported and backed some of the best rock stars in the industry including Robert Plant, The Faces, Mark Knopfler and Paul Weller,Mollie Marriott (daughter of the Legendary Small Faces front man Steve Marriott) is set to take the industry by storm. Mollie’s live performances exude a warm, charming rapport with her audience. Her sassy soulful blues vocals are full of classic influences. She can find a raw emotional edge that the best soul and rock singers have – at times rootsy and upscale through to modest and classy with a sustained relaxed feel.