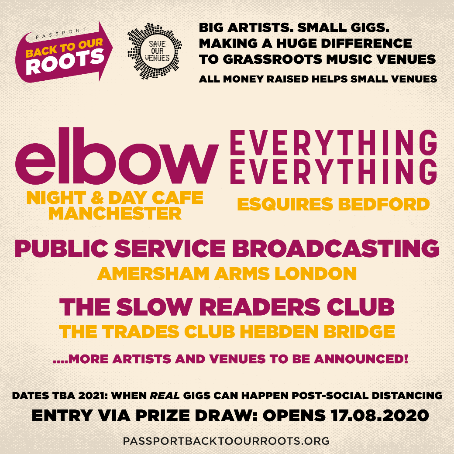 Elbow, Everything Everything, Public Service Broadcasting and The Slow Readers Club are the first artists to announce gigs for Passport: Back to Our Roots, the new campaign to raise money for grassroots music venues at risk of closure. More artists will be announcing gigs soon.

The artists will be playing one-off, intimate shows at grassroots music venues on dates to be confirmed, when it is safe to perform with no social distancing.

Entry to these shows will be via a prize draw which will run for two weeks from Monday August 17th via crowdfunder.co.uk/passport-back-to-our-roots. For a £5 minimum donation to the campaign, music fans will be entered into the draw to win entry to the show of their choice for themselves and a guest.

Elbow will be returning to Night & Day, three decades after they first performed at the Manchester venue. “This is a simple way of looking after the very roots of British music, and will result in some powerful, joyous shows when we can at last see each other again. I’m very proud to be involved” Guy Garvey, Elbow.

“We are thrilled and honoured to have Elbow returning to Night and Day. Elbow have been friends of the venue for many years. We’d also like to thank Passport: Back to Our Roots and the other partner companies for pulling this together and helping grass roots venues like ours at this difficult and challenging time. This should be a very special show and has the potential to be something quite amazing!” Jennifer Smithson, Night and Day

“Like all artists worth their salt, we came up through smaller rooms and tiny stages, learning our craft as we went. So often these vital venues are run on a shoestring, but what they provide to their community socially and artistically is invaluable. The Back to Our Roots project is helping grassroots music venues back on their feet after these testing times. We wanted to come to Esquires [in Bedford] as it’s exactly the sort of gig we’d have done ten years ago, but actually never had the opportunity to. It’s our pleasure to be involved” said Jeremy, Everything Everything

Audio-visual songsmiths Public Service Broadcasting will be performing at The Amersham Arms in New Cross, while The Slow Readers Club will be playing at Hebden Bridge Trades Club.

“We’re delighted to be taking part in Passport: Back to Our Roots and taking the chance to play at The Amersham Arms. We never actually managed to play there when we started out so it’ll be great to do so, finally, and in support of such a good cause. See some of you there as soon as it’s safe – we can’t wait” J. Willgoose, Esq. Public Service Broadcasting.

“Like loads of other bands, acts or performers, grassroots music venues were there to give us a stage when we first started out so to be part of this cause to ensure they survive and thrive makes total sense. It’s the least we can do. We’re buzzin to be going back to Hebden Bridge Trades Club. Low stage, crammed in crowd, bouncing and sweaty…. proper old school. We can’t wait” The Slow Readers Club.

The brainchild of Sally Cook, Director of Operations at Band on the Wall, and Stephen Budd, creator of War Child’s Passport: Back to the Bars and Passport: to BRITs Week series, Passport: Back to Our Roots has partnered with Music Venue Trust to raise much needed funds to safeguard the futures of grassroots music venues struggling to survive the COVID-19 crisis.

80% of all money raised will go to the Music Venue Trust, who in turn will distribute half of the amount to the host venue with the remainder going into their Crisis Fund, benefiting all venues in need of financial support. The remaining 20% will go to Inner City Music, the charitable organisation that operates the multi-award winning not-for-profit historic music venue Band on the Wall in Manchester, which is responsible for the administration of the project and will cover its overheads.

Seeing established artists live in an intimate setting that holds real significance for them is at the heart of the Passport: Back to Our Roots campaign, which aims to capture the true essence of the live music experience and the unique bond between artist and audience.

Sally Cook, co-founder of Passport: Back to Our Roots and Director of Operations at Manchester’s Band on the Wall said, “It’s incredibly exciting to see artists supporting the grassroots venues that form the foundation of the UK’s live music industry, acknowledging their importance and celebrating the unrivalled experience of watching your favourite bands up close and personal, surrounded by friends and united in appreciation for live music in all its loud and sweaty glory.”

Stephen Budd, Founder and CEO of Stephen Budd Entertainment said, “I’m delighted to help put this amazing series of shows together. There is nothing like seeing your favourite artist in a venue that is closest to the artist’s hearts. These shows will be awe-inspiring for those fans who are lucky enough to win the prize draw and also a joy for the artists who participate knowing they are helping keep live grassroots venues alive”.

Mark Dayvd, Founder and CEO of Music Venue Trust said, “Our #saveourvenues campaign has been very successful so far in raising funds and awareness to support grassroots music venues who have been hit very hard in recent months, but we are not complacent and are under no illusions that there still many challenges to overcome . There remains lots of work to do to safeguard the future of our venues and Passport: Back to Our Roots is an excellent and timely initiative that will help keep a spotlight on what still needs to be done while raising desperately needed revenue. Live music will be back and when it is we are going to make sure it comes back with experiences people will never forget’