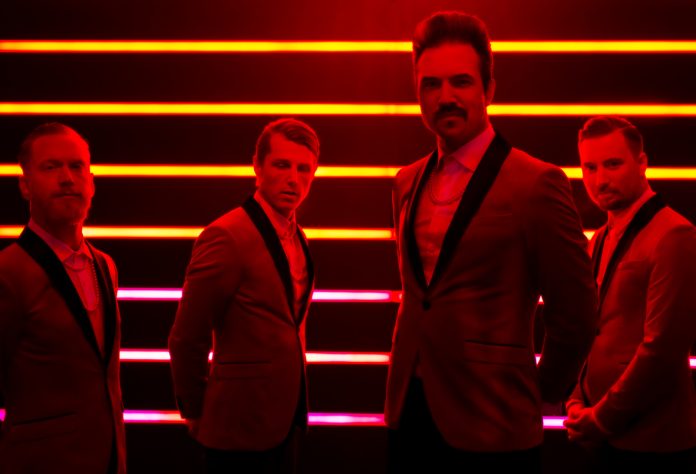 Nuclear Blast are proud to announce the worldwide signing of Sweden’s four-man rock sensation and party machine ROYAL REPUBLIC. Welcome to the family!

“We’re stoked to officially have Nuclear Blast be part of the ROYAL REPUBLIC family! After three divorces, we’re sure we found the right one this time! It’s with tremendous excitement we look into the future, together. Hopefully. Just kidding. Seriously stoked!” – Adam Grahn ROYAL REPUBLIC

ROYAL REPUBLIC don’t believe in “guilty pleasures” – only pleasures, free of compromise. Since meeting at the Malmö Academy Of Music in 2007, they’ve become Sweden’s most addictive rock’n’roll export; mixing riffy guitars, king-sized tunes and jet-packed beats with their own eclectic tastes and inimitable joie de vivre. Plus the kind of snazzy suits most of their contemporaries wish they had the balls to pull off. They encapsulate the raw spirit of punk with the hips of James Brown and swaggering braggadocio of James Bond. No wonder they struggle to label themselves! They’ll rock the shit out of you and make you dance like you’ve just won the lottery.

“We are absolutely excited to be releasing the band’s new album after their hugely popular record Weekend Man.” – Marcus Hammer NUCLEAR BLAST

ROYAL REPUBLIC have just finished the production of their forthcoming studio album which is expected to be released in 2019.

The four-piece have a string of UK live dates planned for 2019 – kicking off with Download Festival on June 15th this summer, followed by an eleven date headline tour in October. You can read the full list of dates below. Tickets are on sale now!